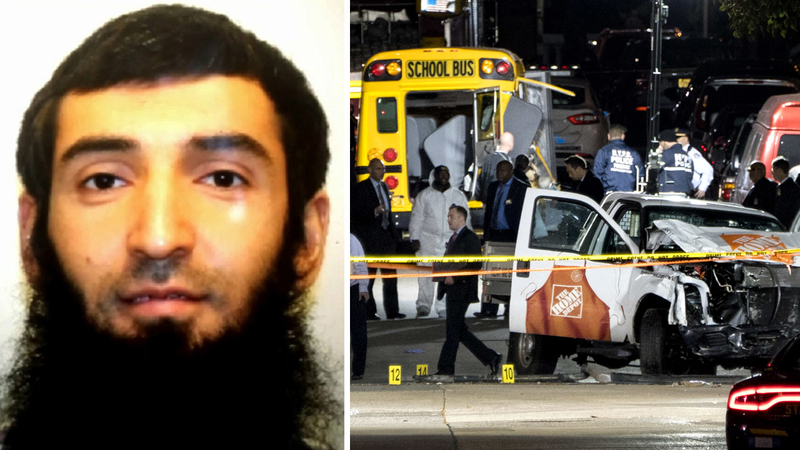 NEW YORK -- A man charged with killing eight people on a New York City bike path spoke out at a pretrial hearing Monday, complaining that his prosecution was moving forward while no one was held accountable for the death of Muslims worldwide.

Sayfullo Saipov, 31, remained quiet until the end of a federal court hearing meant to discuss issues relating to his upcoming trial. Then, he asked to speak.

U.S. District Judge Vernon S. Broderick advised him he probably should express himself through his lawyers and he reminded him that anything he said could be used against him.

Still, Saipov, speaking through an interpreter, insisted on addressing the court, saying there were multiple occasions "when the Muslims all over the world - the wives and the kids - (were) dying under the bombs of the American government."

He added: "And you're judging me for the eight people killed and you're not judging the prosecutors when the thousands and thousands of Muslims are dying all over the world."

The judge reminded Saipov that he was serving "like a referee" for the trial but that he would not be determining his guilt or innocence.

Broderick also noted that he had allowed Saipov to speak at a hearing last year and he advised Saipov that his comments should be "saved for a different time."

Saipov will have the opportunity at trial to testify. If he is convicted, he will be able to speak at a sentencing proceeding as well.

Saipov has been held without bail since his arrest immediately after the attack in lower Manhattan on Oct. 31, 2017.

Prosecutors say Saipov deserves death for mowing over the victims with his truck.

He moved to the United States legally from Uzbekistan in 2010. He lived in Ohio and Florida before joining his family in Paterson, New Jersey.

His trial is scheduled for April.