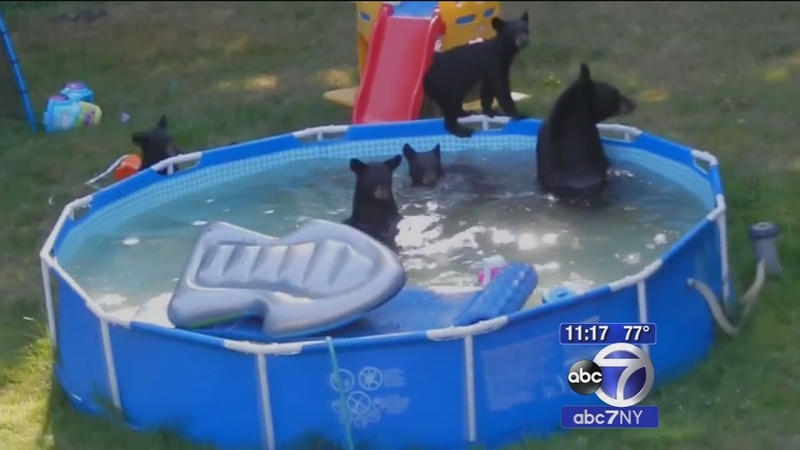 ROCKAWAY TWP., N.J. (WABC) -- A North Jersey pool party got a little wild because the guest turned out to be a family of bears.

The Basso family who owns the pool in Rockaway Township, Morris County, filmed a mama bear and five of her cubs cooling off in their backyard earlier this week.

"I thought they would get a drink or just drink out of it for a minute and then move on, but they pretty much started climbing," said Tim Basso.

"My first thought was really, where is the dog and where are the kids?"

With everyone accounted for, the Bassos watched safely inside while Tim's wife started recording the video.

Listen to the kids' reaction from inside the house:


The cubs splashed around and checked out the playset.

"They came in, they experienced the pool, they got it, they seemed to enjoy themselves. They did a little bit of damage on the pool toys and floats and whatnot, but all in all I don't think it was a terrible experience," Tim said.

The family called 911, but there was little police could do. Police suggest that you leave the animals alone and do not approach them.

The bears left on their own after an hour. Police say if they hadn't moved on they usually try blasting an air horn to get them moving. If that doesn't work, non-lethal rubber bullets and a flash bang are used.

"Once they start running, the loud percussion will keep them moving," said Officer Nicholas Lyasko, of the Rockbury Township Police Department.

Neighbors say that they have seen the bear family around for some time now.