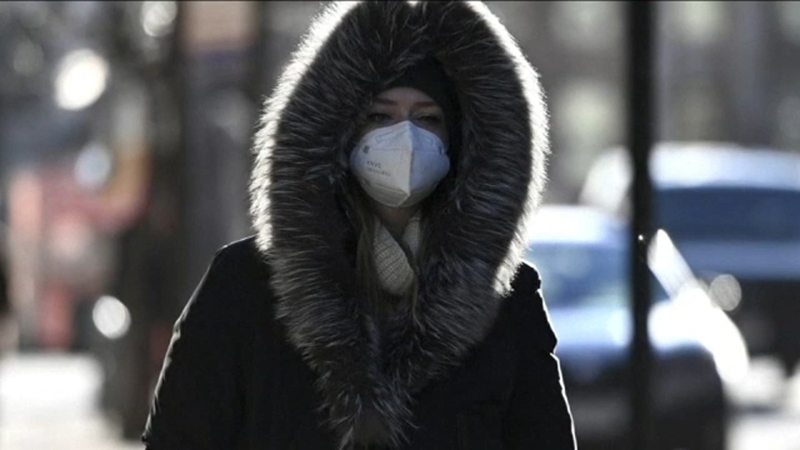 NEW YORK (WABC) -- Beijing reported its first local omicron infection on Saturday, according to state media, just before it hosts the Olympics starting on Feb. 4 and around two weeks before the start of Lunar New Year celebrations.

The infected person lives and works in the city's northwestern district of Haidian and had no travel history outside of Beijing for the past two weeks. The individual experienced symptoms on Thursday and was tested on Friday for COVID-19, officials said in a news conference Saturday.

The patient's residential compound and workplace have been sealed off and authorities are mass-testing people linked to either location. Some 2,430 people had been tested as of Saturday night, according to The Global Times, a state-owned newspaper.

At-home test reimbursement program begins
On Saturday, the federal government is rolling out a reimbursement program for at-home COVID tests. Insured Americans can get eight of those tests per month. Insurance companies say it will take time to put the new system in place. "Keep that receipt and you'll be reimbursed for that purchase," Blue Cross Blue Shield's Kim Keck said. "I just think it's going to be potentially a little bit bumpy here in the next, maybe even several weeks." As for the free rapid tests President Joe Biden promised to send to Americans, the White House says those will be available to order next week at covidtests.gov and they'll ship in 7-12 days.

Higher risks for unvaccinated pregnant women, study says
A newly published, pre-omicron study out of Scotland found unvaccinated pregnant women with COVID and their newborn babies have a higher risk of complications, like hospitalizations and death from the virus, compared to those who are vaccinated. Right now, more than 20% of Americans eligible for the shots have yet to get at least one dose. In the nation's hospitals, as the omicron variant surge continues, doctors say they are seeing more kids sick with COVID than ever before. Meantime, the White House says the administration has a stockpile of more than 750 million high quality masks like the N95 available. But, it's still unclear if and how Americans can actually get their hands on them.

Walgreens, CVS shut some pharmacies on weekends as omicron strains staffing
A Walgreens spokesperson tells ABC that while the "vast majority" of their stores are open and operating with "normal" business hours, omicron's surge combined with an ongoing labor shortage has forced some stores to adjust their hours, or temporarily close. The spokesperson calls these "isolated instances."

"When making the difficult decision to adjust store hours, we make every effort to minimize disruption for our customers," the spokesperson said. "We select days with the lowest prescription demand, ensure that there is a nearby pharmacy to meet any immediate prescription needs and provide patients as much advanced notice as possible through signage, automated phone calls and adjustments in refills."

A CVS spokesperson says temporary store closures are happening in a "tiny fraction" of their stores, "largely" due to employees out sick during omicron's spread. CVS announced last fall they were going on a major hiring spree aiming to recruit and fill 25,000 clinical and retail jobs to prep for what they already expected to be a very busy season between testing demand and vaccinations -- even before omicron. Those thousands of jobs were for pharmacists, pharmacy technicians and nurses at their retail locations to be filled "as soon as possible" -- though it appears even that effort has not spared their workforce from this latest surge.

NYC COVID hospitalizations 'stabilizing' and could soon decline, Mayor Adams says
New York City Mayor Eric Adams said Friday that hospitalizations from COVID-19 are "stabilizing" and could soon start to decline.
"It's stabilizing, and based on our optimistic views, we appear to be moving in the right direction," he said. "It really appears the numbers in our hospitals are stabilizing. We are looking forward just continuing to stabilize and hopefully see a decline. The goal is to continue to do the great things that New Yorkers are doing. I cannot overemphasize...it's about vaccinations and booster shots."

NYC area restaurants had record decline in visits during COVID-19 pandemic
New York City area restaurants saw record declines in visits from January 2020 to the end of 2021, according to ABC analysis of data provided by Safegraph. The five boroughs and surrounding suburban counties lost, in the first days of 2020, an average 64% of their foot traffic to local restaurants. Over the pandemic, so far, the city's restaurants saw an average total decline of 32.6%. The COVID-19 pandemic flattened business throughout the city, among the hardest hit were its restaurants. Collectively they were the largest sector by the amount for Federal Paycheck Protection Program loans, according to Eyewitness News data analysis.

Omicron may be on the decline but school attendance remains low, and now after previous resistance from Mayor Eric Adams, he says a remote option is on the table. Attendance was just 77% on Thursday in New York City Public Schools with more than 200,000 students staying home. Now, Mayor Eric Adams is in talks with the teachers union discussing the possibility of a temporary remote option. That's even though health experts agree, kids learn and develop best when they're in a classroom.

Could the COVID-19 pandemic end soon? Here's what experts say about endemic phase
It is "reasonably likely" to expect the pandemic to draw to a close as soon as a month from today, though COVID-19 is likely to stay, according to UCSF's Chair of the Department of Medicine, Dr. Robert Wachter. He expects infections to fall and community immunity levels to rise from a combination of vaccinations, antiviral medication and omicron infections as the pandemic enters a new phase -- turning endemic. This sentiment is echoed by other infectious disease experts in the field.

"The end game is really bringing down the virus to low levels where we just live with it. And what omicron will do is bring the virus down to low levels in the community because it's causing so much immunity," say Dr. Monica Gandhi, an infectious diseases doctor and Professor of Medicine at UCSF. "It'll bring it down to a controllable phase, which we call endemicity. So after this surge, we should be in the end game of the pandemic and into endemic."

Goodbye 'godsend': Families going without monthly deposit as child tax credit program expires
For the first time in half a year, families on Friday are going without a monthly deposit from the child tax credit - a program that was intended to be part of President Joe Biden's legacy but has emerged instead as a flash point over who is worthy of government support. Retiree Andy Roberts, from St. Albans, West Virginia, relied on the checks to help raise his two young grandchildren, whom he and his wife adopted because the birth parents are recovering from drug addiction. The Robertses are now out $550 a month. That money helped pay for Girl Scouts, ballet and acting lessons and kids' shoes, which Roberts noted are more expensive than adult shoes. The tax credit, he said, was a "godsend."

"It'll make you tighten up your belt, if you've got anything to tighten," Roberts said about losing the payments.

The monthly tax credits were part of Biden's $1.9 trillion coronavirus relief package - and the president had proposed extending them for another full year as part of a separate measure focused on economic and social programs. But that effort failed.

NY eviction moratorium to expire Saturday, NYC mayor asks federal government for relief funds
New York will let its eviction and foreclosure moratorium expire on Saturday, but will once again let people apply for eviction protection and rent relief. Tenants' rights advocates rallied on the steps of the New York Public Library asking for federal relief for families still struggling amid the pandemic. Some 100 protesters joined city leaders on Friday asking Governor Hochul for another extension to the eviction moratorium until the end of June.
"We're here today fighting to get our electeds to pay attention and understand and we're going to keep fighting until they take action," said Jarrod McFarlane, of Housing Justice for All. "Our governor and our assembly have decided to take the week off, and we think it's unconscionable in a week when so many New Yorkers are facing being unhoused, and that's what we're here today to represent."

Debunking the idea viruses evolve to become less deadly over time
Scientists warn that omicron's whirlwind spread across the globe practically ensures it won't be the last worrisome coronavirus variant. As evidence mounts that the omicron variant is less deadly than prior COVID-19 strains, one oft-cited explanation is that viruses always evolve to become less virulent over time. The problem, experts say, is that this theory has been soundly debunked. The idea that infections tend to become less lethal over time was first proposed by notable bacteriologist Dr. Theobald Smith in the late 1800s. His theory about pathogen evolution was later dubbed the "law of declining virulence."

Stay home or work sick? Omicron poses a conundrum for workers without paid sick days
As the raging omicron variant of COVID-19 infects workers across the nation, millions of those whose jobs don't provide paid sick days are having to choose between their health and their paycheck. While many companies instituted more robust sick leave policies at the beginning of the pandemic, some of those have since been scaled back with the rollout of the vaccines, even though omicron has managed to evade the shots. Meanwhile, the current labor shortage is adding to the pressure of workers having to decide whether to show up to their job sick if they can't afford to stay home.

"It's a vicious cycle," said Daniel Schneider, professor of public policy at the Harvard Kennedy School of Government. "As staffing gets depleted because people are out sick, that means that those that are on the job have more to do and are even more reluctant to call in sick when they in turn get sick."