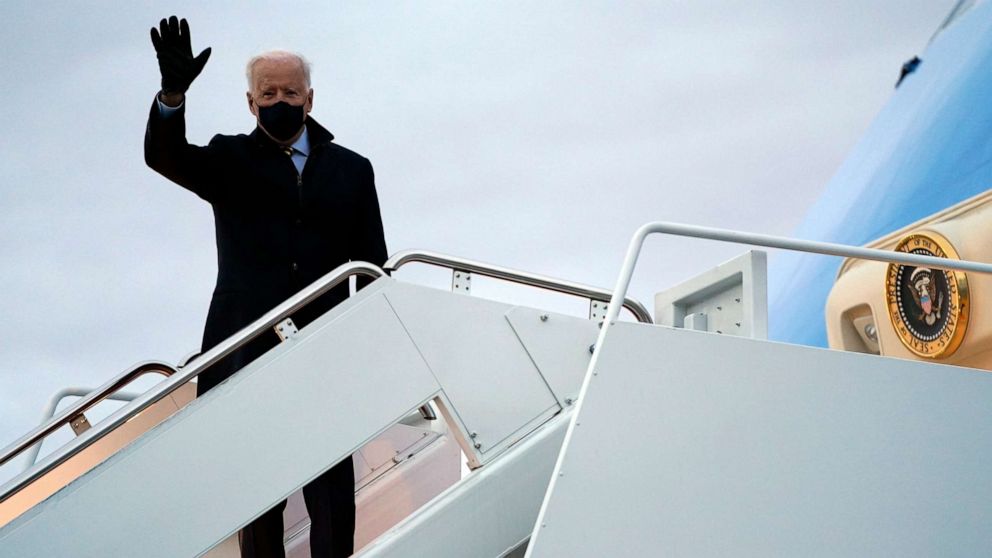 Now that former President Donald Trump's second impeachment trial is over, President Joe Biden is working this week to shift attention back to his ambitious agenda, with COVID-19 and his $2 trillion relief package taking center stage.

As Biden continues to work to get at least some Senate Republicans on board, on Tuesday he's taking his message outside of Washington and directly to the American people while making his first official trip as president.

On Tuesday evening, Biden will take part in a televised CNN town hall in Milwaukee, before heading to Kalamazoo, Michigan, on Thursday where he is expected to tour a Pfizer manufacturing facility currently producing the COVID-19 vaccine and to meet with workers.

The visits will give him his first opportunity to make his case for COVID-19 relief to every day Americans since taking office and in two states that were critical flips for him in the 2020 election, helping to put him in the White House.

The states were chosen because they are emblematic of the struggles people around the country are facing in the midst of the pandemic and economic fallout, according to a White House official.

Senior White House Correspondent Mary Bruce asked White House press secretary Jen Psaki Tuesday if the president's taking his message directly to the American people was a signal that he was throwing in the towel on earning Republican support in Congress.

"He certainly wouldn't agree with that. I would say that the president's view of the package --- One, I would say first the president has not shifted gears. He's been focused every single day even as others have not, which is understandable, on engaging with partners, stakeholders, people who agree, people who don't agree with you on getting this package through," Psaki replied during a White House press briefing. "This is an opportunity, as you noted, to go out and have a conversation with the people of Wisconsin, people who agree with him or disagree with him. But if you look at the polls, they are very consistent. The vast majority of the American people like what they see in this package. That should be an indication or should be noted I members of Congress as they consider whether they will vote for it or not.

Bruce pressed Psaki on whether the trips to Wisconsin and Michigan were meant to build pressure on the Republicans.

The last round of stimulus passed by Congress is set to expire on March 14, leaving Biden less than a month to win the support of Republicans and get the bill through both the House and the Senate and on his desk before the relief ends.

Regardless of the time crunch, Democratic Sen. Chris Coons of Delaware, one of Biden's closest allies in the Senate, expressed confidence Democrats will deliver on Biden's first big legislative push, saying it has broad support outside Washington.

"(I)f a month from now as unemployment checks are on the verge of stopping for ten million Americans, we can proceed with a Democrat-only bill. President Biden is uniting the American people, he's moving forward with relief that has the support of three-quarters of the American people," Coons said on ABC's "This Week" Sunday.

As Biden takes his message directly to the American people, a White House official argued that if there is Republican support in the country for the proposal, there should be support in Congress as well.

But while White House advisers said the president is still committed to earning bipartisan support, he won't take the option of proceeding on a partisan basis off the table.

"We have many Republican mayors, governors, we have more than 50% of Republicans in this country. 46% of Trump supporters. There is just one place we don't have anybody who's signed on yet. That's in the United States Congress," Cedric Richmond, a White House senior adviser and director of the Office of Public Engagement, said on CNN Monday.

"We are still working every day to see if we can get Republican support for the plan. What we won't do is slow down and not meet the needs of the American people by waiting," Richmond added.

Even amid the Trump impeachment trial, Biden continued his efforts to bolster bipartisan support for his American Rescue Plan, holding meetings with Republican and Democratic mayors and governors in the Oval Office on Friday, while House Democrats also pushed ahead on the bill through the reconciliation process that would allow them to pass the measure on a party-line vote given their slim majority in the Senate.

The administration has also pushed ahead on containment efforts for the virus, releasing new guidance from the Center for Disease Control and Prevention for reopening schools safely, announcing the procurement of enough vaccines doses to fully cover 300 million Americans by the end of July, and launching a special 3-month health care enrollment period on Healthcare.gov as the pandemic continues to surge, leaving many Americans out of work.

In his statement on the launch of the enrollment period Monday, Biden said it was "encouraging to see Congress moving quickly" to pass the plan. But so far, no Republicans in Congress have signaled support for the bill that according to a recent ABC News/Ipsos poll, less than half of Americans support Biden passing with just the support of the Democrats alone.

Biden is also expected to address COVID-19 globally this week, taking part in a virtual meeting with leaders from the G-7 Friday that will include "a focus on a global response to the COVID pandemic, including coordination on vaccine production, distribution, and supplies, as well as continued efforts to mobilize and cooperate against the threat of emerging infectious diseases by building country capacity and establishing health security financing," according to the White House.
Report a correction or typo
Related topics:
abc newsnational
Copyright © 2021 ABC News Internet Ventures.
More Videos
From CNN Newsource affiliates
TOP STORIES