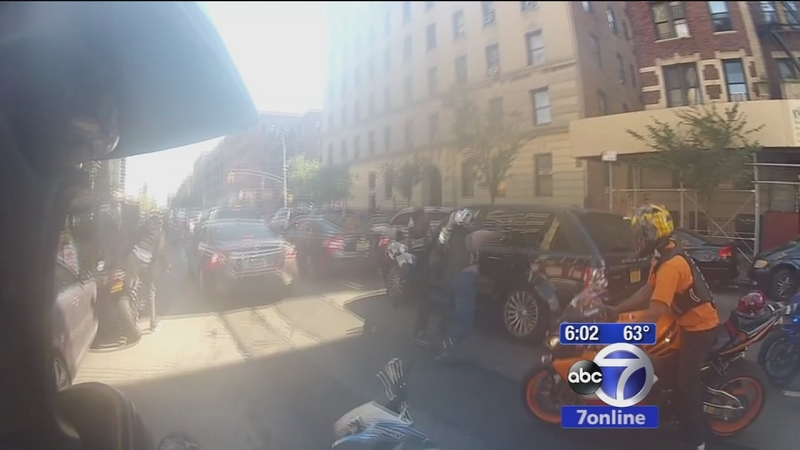 NEW YORK (WABC) -- An undercover detective accused of shirking his police duties and joining a mass of angry motorcyclists who assaulted an SUV driver was back on the stand in his trial Thursday.

Prosecutors introduced Wojciech Braszczok's text messages sent after the incident. He jokes about the incident, the prosecution said, and tells people not to talk about it, making a reference to the Brad Pitt movie Fight Club.

Braszczok, the 34-year old NYPD detective who has been hiding his face in a Lower Manhattan court for nearly two years, testified with confidence about why he didn't intervene during the beating of Alexian Lien.

"Did I violate policy by not calling 911 or the department supervisor? Yes, I did. Criminally, I believe I didn't nothing wrong," said Braszczok.

On the second day of his testimony during cross-examination, prosecutors hammered Braszczok about why he didn't tell his handler nor his fellow police officers in the motorcycle riding club The Frontline Soldiers that he was there during the assault of Lien when they discussed it in the 72 hours following the incident.

Prosecutor : "You claimed you had no involvement?"

Braszczok: "I told Ruben that I wasn't involved with the assault."
Prosecutor: "But you told Officer Younger that you weren't even present? You were lying about what you had and hadn't seen??"
Braszczok: "Yes, I was lying. I didn't want to get them involved."
Prosecutor: "Is the reason you didn't tell him is that you were protecting him or you were protecting you?
Braszczock: "I was looking not to get fired from the job. Yes, I was looking out for myself."

Prosecutors worked to prove Braszczok told various versions of the story..that he wasn't there, that he yelled at a civilian to call 911, and also that he wasn't close enough to the SUV to see what happened to Lien.

But there is cell phone video of Braszczok smashing his helmet into the rear window and kicking the black Range Rover.

Prosecutor: "You also left out that you delivered two roundhouse kicks to the back window?"
Braszczok: "No, I didn't tell him that."

He said he had intentions of letting the department know sooner but was advised against it.

Prosecutor: "Did you tell anyone other that your lawyer or your delegates?"
Braszczok: "I was going to. But they told me not to say anything."