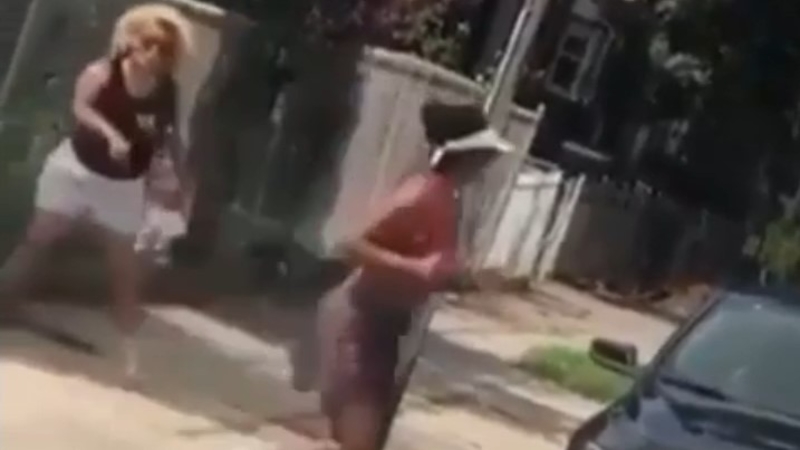 Woman arrested for hate crime against Black jogger in Queens

WOODSIDE, Queens (WABC) -- The NYPD have announced an arrest in connection with an attack on a jogger in Queens.

Video released last week showed a woman throwing a glass bottle at the Black woman while yelling a racial slur.

It happened around noon on Monday, August 17, at the northeast corner of 53rd Place and Broadway in Woodside.

APPREHENDED!! The perpetrator in this incident has been arrested. https://t.co/cdkStQJd9T

Authorities say 37-year-old Tiffany Johnson was jogging when Delaguna approached, threw a glass bottle at her, shouted a racial slur, then continued to yell at the victim.

"She was so loud and aggressive," Johnson said Wednesday. "She did call me the N-word, and I mean I'm not an N-word, none of us are, but the reality is that this woman felt that she needed me to be that and I would just say that she needs to look into herself as to why."

Johnson wasn't injured and continued to jog away, but she said even after the camera stopped rolling, the suspect was relentless.

"She followed me up the block, was screaming 'get out of here, go back to Africa...N-word,'" Johnson said.

People tried to shoo the suspect away, but Johnson was afraid the situation would escalate.
"When you have adrenaline going, the first thing for me was to get out of the situation," she said.

At the time, Johnson didn't know someone was recording the incident. She said she spotted it on social media a couple days ago and went to police knowing she had proof.

Johnson said it has been a soul-searching process for the suspect who has a lot of work to do on herself.

"Her issues, whatever her actions were, are a reflection on her, it's not my problem, it's her problem," Johnson said.