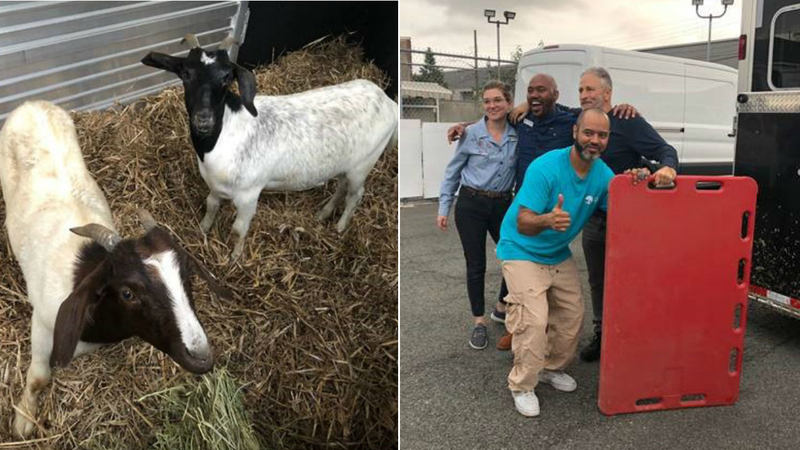 BOROUGH PARK, Brooklyn -- A pair of goats who caused quite a scene in Brooklyn on Monday morning have been rescued by a famous animal lover.

Passersby got a glimpse of a strange sight in Brooklyn, after a pair of goats roamed onto the N train subway tracks in Borough Park.

The animals were near the 8th Avenue subway station, first spotted around 11 a.m.

A new one for us (we think): Two goats are roaming along the N line tracks in Brooklyn. They’re safe and not currently affecting service, but they are on the run. We’ll keep you posted.

The MTA said the goats were safe, as they were roaming around a portion of the N train known as the Sea Beach Line, one of seven stations without service for the summer because of renovations. Still, they were very close to tracks currently in use.

N train service was delayed for approximately two hours coming south into Coney Island, and southbound N trains were temporarily rerouted on the D line from 36th Street to Coney Island Stillwell Avenue while the NYPD and animal control officers worked to safely retrieve the goats.

"We've seen cats and dogs but never goats," said Captain Jonathan Bobin, of Transit District 34. "This is a new one here...They were nervous and kept running from our personnel, but we were able to get them and take them off the tracks safely."

The goats were tranquilized by NYPD ESU officers and removed from the tracks.

UPDATE: goats in custody - tranquilized and still snoozing when our officers handed them over to specialists at Animal Care Center. Thanks to @NYCTSubway & @NYPDSpecialops pic.twitter.com/oWSlJKYjCB

"First thing we did was shut the power off on the live tracks here, so our personnel could operate safely, because obviously the goats would be running around back and forth on different surfaces," Bobin said. "They were running about 300 feet back and forth between the two stations. They were together at first then separated. They got one goat by the New Utrecht station and the other by Fort Hamilton."

There is no word on where the goats came from.

"There are a number of meat markets in the area, so the theory is they could have come from one of those places," Bobin said. "But as of now, nobody has stepped forward to claim the goats."

Comedian Jon Stewart rescued the goats from Animal Care and Control in Brooklyn later Monday afternoon and transported them to Farm Sanctuary in Watkins Glen, in upstate New York. The goats have since been named Billy and Willy.