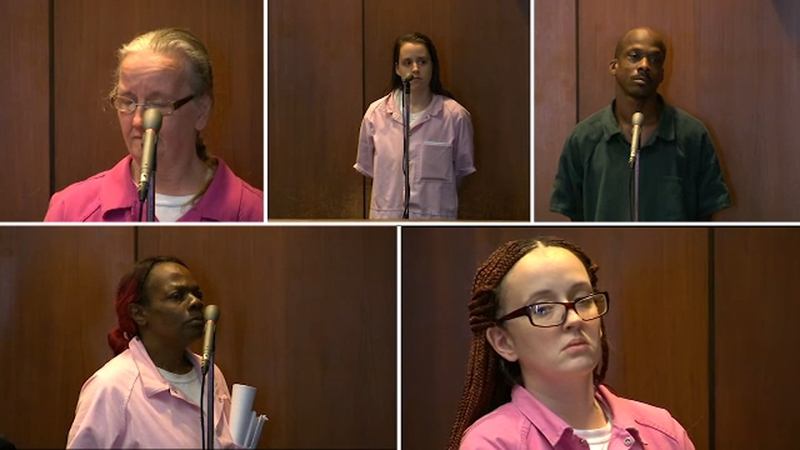 NEWARK, New Jersey (WABC) -- Five adults accused of torturing a 3-year-old boy in their care pleaded not guilty to aggravated assault and endangering the welfare of a child on Tuesday.

A sixth suspect had her court appearance postponed.

Assistant Essex County Prosecutor Kathleen Lyons-Boswick described in vivid detail how the adults allegedly made life a living hell for the boy. His mother burned him with cigarettes, she said, and the adults allegedly beat the boy with a belt and encouraged other children to beat him as well.
EMBED More News Videos

The house of horrors came to light in early December, when a nurse from the victim's pre-school noticed the injuries and reported them to authorities.

There were a total of six adults and six children living in the home, but only one child was victimized. The others were apparently in good condition living with the adults, who were not all related.

The mother of the child is Natacha Smith, 43, who moved into the Clinton Place apartment back in the summer. Her boyfriend, Homer Searcy, also lived in the apartment and was accused of beating the boy, punching the child and even sending a text message to one of the other adults saying the 3-year-old should be beaten once again for having an accident.

Five of the adults are currently being held at the Essex County Correctional Facility in Newark.

Patricia Buchan, who was 7-months pregnant, has been allowed to remain on 24-hour home detention with an ankle monitor.

The six children have all been turned over to children's services.