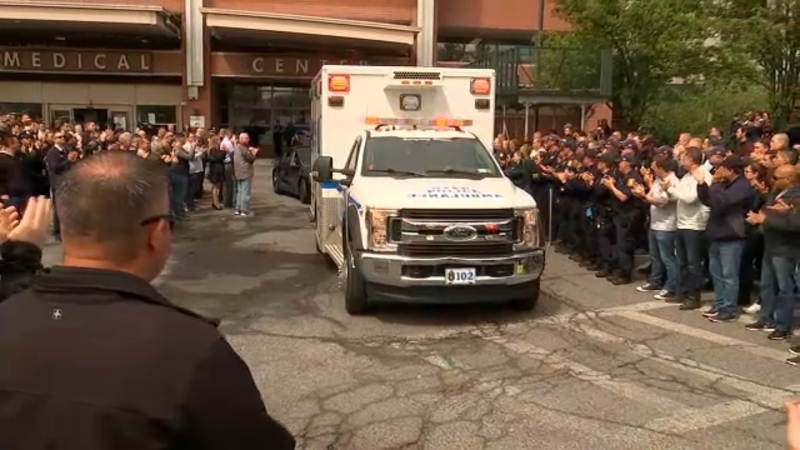 YONKERS, Westchester County (WABC) -- A veteran detective who was shot during a confrontation with a suspect in a Yonkers bodega was released from the hospital Tuesday to a rousing applause from fellow officers.

Last month, the 27-year veteran of the force -- who was just one week from retirement -- was seriously injured when he was shot in the stomach.

"He has damage to his colon, his intestines and his kidneys, and he lost a tremendous amount of blood," Yonkers Police Commissioner John Mueller said after the shooting. "But thankfully, we think he's going to be OK."

The shooting happened around 2:10 p.m. on April 20, as members of an FBI crime-suppression task force were pursuing suspects in a gun investigation near the intersection of Elm Street and Lincoln Street in the Nodine Hill neighborhood.

One of the suspects attempted to push past the detective before appearing to fire a gun from his pocket, wounding Menton.

The FBI agent then shot the suspect, killing him.

Several other people were arrested and two guns were recovered, including the one allegedly used to wound the detective, Mueller said.

It was just the third shooting this year in Yonkers.

Despite a detective being shot this week, officials say shootings in Yonkers are uncommon. In fact, there's been just three so far this year.