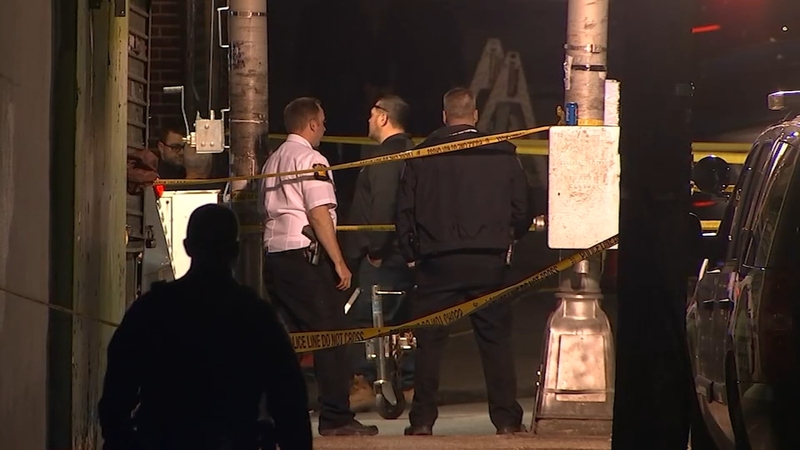 Gunfire was exchanged Wednesday afternoon in the Nodine Hill neighborhood near the intersection of Elm Street and Lincoln Street.

City officials say a task force of Yonkers Police and federal agents were targeting three suspects inside a bodega while conducting a gun investigation.

When officers entered the bodega one of the suspects pulled out a gun and fired a shot striking a Yonkers detective in the stomach.

"We have an officer who has tremendous damage to his stomach, colon, intestines, just really thank god he looks like he's gonna pull through," Yonkers Police Commissioner John Mueller said.

A Yonkers police officer was shot on Elm Street and is being taken to Jacobi Medical Center.

An FBI agent on the task force returned fire, killing the alleged shooter.

"What you saw here is very very proactive policing," Yonkers Mayor Mike Spano said. "And that's what our officers do every single day. They're out here proactively going after the bad guys."

Officials said a police officer was critically injured after being shot in the suspect in Yonkers while conducting a firearms investigation.

In fact, Spano said this very task force is responsible for driving crime down, to levels unheard of next door in the Bronx.

The veteran officer who was shot, was out of surgery late Wednesday night and his condition was upgraded to serious, but stable.

This was just the third shooting this year in Yonkers.

Corazon Pineda represents Nodine Hill on the Yonkers City Council. She says the community and its cops have worked together for years.

"They have a very strategic way in which they police and they go after the same people that they know are committing crimes and perpetrating our streets," Pineda said.

But as the city of Yonkers breathed a sigh of relief its detective's condition wasn't life-threatening, there is a family grieving Wednesday night.

Jackson says it was her son, 28-year-old Bryant Jackson Adams, who was shot and killed when that corner bodega became a crime scene.

"I want them to know he was a good person," Jackson said. "He would help anybody and try to take care give the shirt off their back to help someone and now I don't have a child."

The officers involved in the shooting were in plain clothes when they followed the suspects into a bodega.

The gruesome murder of a mother whose body was found in a duffel bag in Queens, led investigators to a bar that may have been the place where she was last seen alive. NJ Burkett has the details.