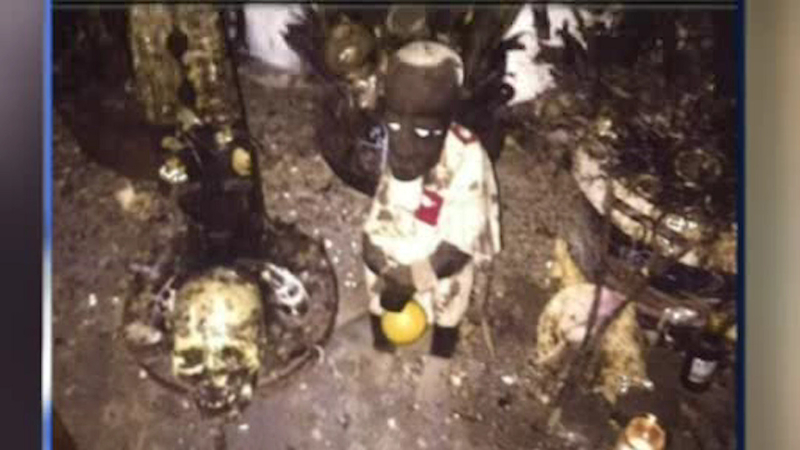 BRIDGEPORT, Connecticut (WABC) -- Police in Bridgeport, Connecticut thought they might be investigating a possible heroin ring, but what they found was a man who calls himself a "high priest" of Santeria, the ritualistic, sacrificial religious cult.

When police raided a Bridgeport home they found two human skulls, a makeshift coffin, and an altar, used in Santeria.

"I see cars all hours of the day coming, going," said Doris Reese, a neighbor.

After complaints from neighbors, Bridgeport police got a warrant to raid what they thought must be a heroin ring. But when they descended on 518 Hallett Street, instead of drugs they found human remains, chicken carcasses, and what looked like blood.

"They were just really shocked when they walked in there and what they found. It was just not what they expected," said Michael Giannotti, Bridgeport Police Department.

It's not illegal in Connecticut, but when they looked him up; they found an active warrant against him in Massachusetts for grave robbing.

Chris Martinez is his son and says Delgado has done nothing wrong, he is just misunderstood.

"Do a lot of people come in and out of here?" Eyewitness News asked.

"It just looks creepy to me, the stuff that I saw," Reese said.

Police in Bridgeport aren't sure what, if any, laws were broken in the state of Connecticut, but Delgado was wanted in Worcester for disinterring eight bodies from a cemetery there.

He's being held on a fugitive from justice charge and will soon be extradited back to Massachusetts.