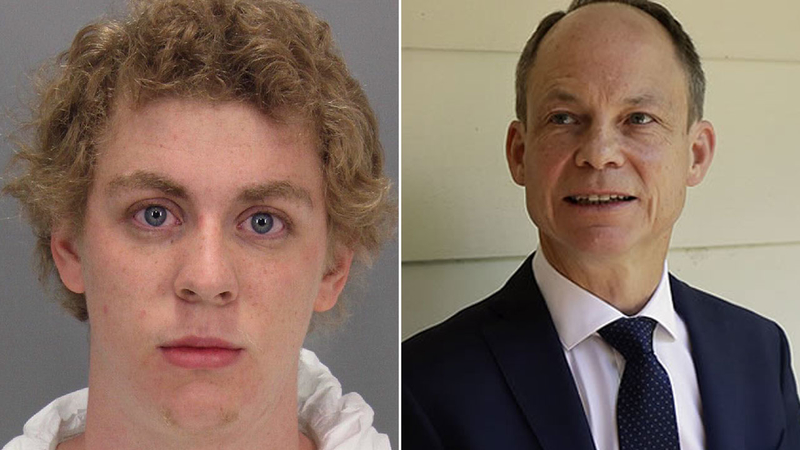 SAN JOSE, California -- Voters have recalled Judge Aaron Persky from office after he sentenced a former Stanford University swimmer convicted of sexual assault to a short jail sentence instead of a long prison term. He is the first California judge to be recalled since 1932.

Persky sentenced Brock Turner in June 2016 to six months in jail instead of prison after he was convicted of sexually assaulting a woman outside a fraternity house. The recall campaign launched shortly afterward.

Glamour Magazine has chosen the young woman at the center of the Brock Turner sexual assault case as one of its women of the year.

The campaign gained national prominence after the victim's powerful courtroom statement lamenting her treatment by the judicial system was circulated widely online. Turner ultimately was released after three months in September of 2016 because of good behavior and had to register as a sex offender.

The victim, who came to be known as Emily Doe, testified she was passed out behind a trash can when two men saw Turner on top of her. The two men, Swedish graduate students, yelled at Turner to stop and then chased him and held him down for police when tried to flee.

Persky is white and holds undergraduate degrees from Stanford and a law degree from the University of California, Berkeley. Many complained Persky showed too much deference to Turner, a white Stanford scholarship athlete whose parents could afford a private attorney. Activists pointed to numerous other cases in which minorities faced much harsher sentences for less egregious crimes.

The recall effort was spearheaded by Stanford law professor Michelle Dauber. Several rallies were held, and an estimated $1 million in campaign donations were raised.

Persky remained silent until a month ago when he spoke to reporters for the first time at a private residence in Palo Alto. He held a public rally on the plaza outside the County Government Center eight days before the election, surrounded by fellow judges from the Superior Court and District Attorney Jeff Rosen.

The impact from the Stanford sexual assault case takes a new turn Friday morning. A group says it has a million reasons why the judge should be removed from office.

His side reportedly raised over $850,000, but part of that is in donated services. The pro-recall side included advocates for women, victims of sexual assault and others demanding the judge be held accountable for his action. When asked why he remained silent for so long, Persky told reporters that he considered it the job of judges to take criticism and to stand silent and be independent.

Dauber said Persky has been criticized for a number of decisions.

"He issued a series of biased rulings in favor of very privileged perpetrators of sex crimes and violence against women, one of which was the Brock Turner case, which generated more complaints than any other judge in probably the history of the state," said Dauber. Persky said he was unaware of complaints.

"When you step into a courtroom before a judge, you will expect, you will request, you will demand a judge who will follow the rule of law, who will tune out public opinion because they must," Persky said.

Persky said he took the victim's experience into account when sentencing Turner.

But the judge said the publicity of Turner's arrest and trial and the young man's loss of a swimming scholarship also factored into his sentence. Turner is also required to register for life as a sex offender. Persky cited numerous letters of support friends, former teachers and employers wrote on behalf of Turner.

Aaron Persky, the judge at the center of a recall effort in Santa Clara County, broke his silence Tuesday.

Both sides did not hold public gatherings on election night. KABC's sister station KGO-TV requested access for comment as the results came in, but no commitment were given.
Two names are on the ballot Election Day to succeed Persky -- they are Cindy Hendrickson, an assistant district attorney in Santa Clara County, and Angela Storey, a civil attorney.

Under the state Constitution, the replacement would have 10 days to be sworn in as judge after certification of election. The unseated judge would be removed at that point.

The Recall Persky Campaign issued the following statement by Dauber:

"The voters of Santa Clara County are the winners of this election. We voted today against impunity for high status perpetrators of sexual assault and domestic violence. We voted that sexual violence is serious and it must be taken seriously by our elected officials.

In this historical moment, when women's rights are under attack, the women and many men of this county stood our ground.

We are grateful tonight to our supporters -- to Senator Kirsten Gillibrand, to Rep. Ro Khanna and to the dozens of other elected officials, like Vice Mayor Carrasco, and Senator Kevin de Leon, and so many others who stood with us; to the women's movement -- to the Feminist Majority-- which stood with us from the first day, to the women of Silicon Valley -- who stood up answered our call for help, and to our brothers and sisters in the labor movement, which stood with us against sexual harassment and violence.

But most of all we are grateful to the voters of Santa Clara County. We have won this fight because the people of this county stood up and said Enough is Enough.

"To girls everywhere, we are with you. On nights when you feel alone, we are with you. When people doubt you or dismiss you, we are with you. We fought everyday for you. So never stop fighting, we believe you. As the author Anne Lamott once wrote, "Lighthouses don't go running all over an island looking for boats to save; they just stand there shining." Although we can't save every boat, we hope that by winning this election today, you absorbed a small amount of light, a small knowing that you can't be silenced, a small satisfaction that justice was served, a small assurance that we are getting somewhere, and a big, big knowing that you are important, unquestionably, you are untouchable, you are beautiful, you are to be valued, respected, undeniably, every minute of every day, you are powerful and nobody can take that away from you. To girls everywhere, we are with you."