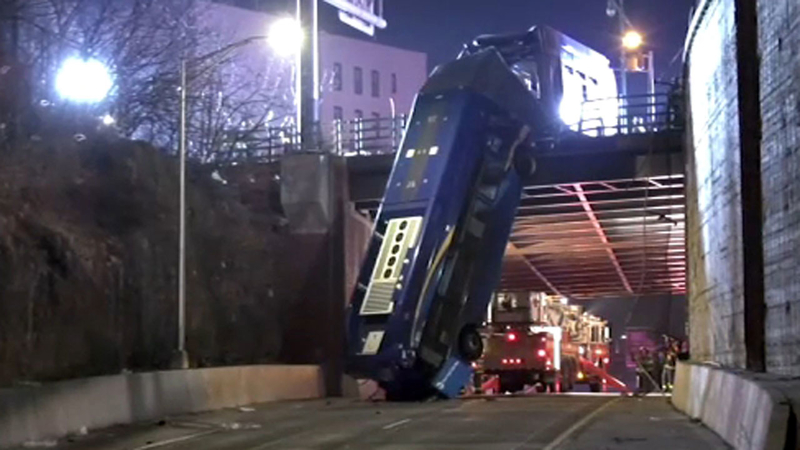 MTA says speed a factor in bus veering off road

MORRIS HEIGHTS, Bronx (WABC) -- Officials say a MTA bus driver was "traveling at a high rate of speed" when his articulated bus careened off a Bronx overpass Thursday night.

Authorities say the 55-year-old driver was attempting to turn left off University Avenue onto a ramp to the Washington Bridge when the Bx35 bus suddenly veered off the road.

The MTA said the GPS revealed the bus appeared to be traveling at 17-26 mph during the incident.

Transit officials held a briefing Friday to discuss the incident.

"We know the speed limit on the road is 25 mph, but the appropriate speed for taking a turn such as this is between 3 and 4 miles per hour," MTA Chief Safety Officer Pat Warren said. "So we can say at this time while the investigation is ongoing, speed is clearly a factor and is obviously of great concern to us."

Authorities say 55-year-old driver Everton Beccan was on his regular route when he attempted to turn left off University Avenue onto a ramp to the Washington Bridge and the Bx35 bus suddenly veered off the road.

The FDNY said the bus fell approximately 50 feet onto the access road below, and half of the vehicle was left hanging off University Avenue feet from the Cross Bronx Expressway below.
EMBED More News Videos

At least seven people were injured after an MTA bus went over a rail to the ground below in the Bronx.

The driver went through the bus to check on the seven passengers, who were all subsequently rescued and taken to the hospital. All are expected to survive, although one of the passengers was more seriously injured than the others.

"We have been informed by the police that the bus operator passed a breath test at the scene, however upon arrival at the hospital, the bus operator refused to take an MTA mandated drug and alcohol test," Warren said. "This is obviously troubling. The investigation is ongoing."

Beccan, an 11-year NYC Transit veteran, had a clean safety and service record prior to the incident, according to officials.

Naveen Dhaliwal has more on a water main break the poured into the Cross Bronx Expressway early Thursday morning.

The articulated bus is made up of two sections, with an accordion section connected by cables. When the bus left the roadway, it was suspended by the cables, which suspended the front section in air.

FDNY units are on scene of a motor vehicle accident at University Ave and the Cross Bronx Expressway in the Bronx where a tandem bus has crashed through the barriers and is hanging off the overpass onto the roadway below. There are nine civilian injuries reported at this time. pic.twitter.com/00YQ897hhs

"The bus was a 2017 new flyer, compressed natural gas bus, an articulated bus coming out of West Farms Depot that was inspected last on Jan. 13 with no mechanical issues." MTA Bus Company President Craig Cipriano said.

Several large cranes were deployed to lift the bus off the expressway. After more than five hours, FDNY crews were able to lift it up and pull it back from the overpass just before 6:30 a.m.

It has been towed to an MTA yard for further investigation.

The bus contains a black box that will help the MTA determine what happened, as well as cameras and passenger counters that collect information.

"The MTA's goal is to have the safest transportation system in the nation, and when an incident like this occurs we take it very seriously," MTA Chief Safety and Security Officer Patrick Warren said. "We are conducting a full investigation and will implement lessons learned in order to prevent it from happening again. We are certain this was a terrifying incident for those customers on the bus. Our hearts go out to them with hope that they can recover quickly."

Video from University Ave and the Cross Bronx Expressway where FDNY members continue to operate on scene for a tandem bus that crashed through a barrier onto a lower roadway. pic.twitter.com/Q0Y0vW7WmT

The Bx35 bus was headed to 178th Street and Broadway in Washington Heights at the time of the crash.