7-year-old grazed in ankle by bullet in Bronx; Calls for end to violence after deadly weekend 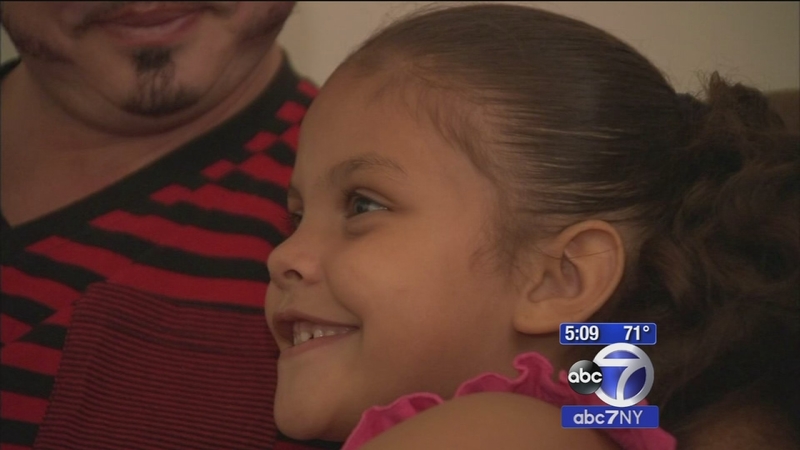 SOUTH BRONX (WABC) -- A 7-year-old girl is recovering after being grazed by a bullet in the South Bronx Sunday evening, the culmination of a violent weekend in New York City that left eight people dead in three different boroughs.

Now, the girl and her father are speaking out to Eyewitness News amid renewed calls from man communities to end gun violence. Juan Maldonado is calling for justice, something he says his daughter Arianna is still too young to understand.

The girl was grazed in the ankle by the bullet just before 9 p.m. on Cauldwell Avenue. She was treated and released, and so far, no arrests have been made.

Arianna says that at first, she was scared, but then she realized it was going to be OK. Her father, however, says nothing about this situation is OK. He wants answers and he wants them quickly.

"She ran back to me screaming, 'Daddy, I got hit, I got hit,'" he said. "I want justice for my daughter. I want somebody, whoever did this, to be found and convicted."

Arianna said doctors fixed her up, and police gave her a teddy bear. They were walking home from dinner at his parents' home when the shot was fired.

"It went straight...it felt like it burned me," she said. "The police and the ambulance came and took me to the doctor."

Her injury was one of many during a violent weekend that left eight people dead since Saturday.

Residents in many neighborhoods complain that the "don't snitch" mentality gets in the way of these investigations, but police say people in all of these communities need to come forward with information.

That incident happened at about 2 a.m. in a walkway at the Raymond Ingersoll Houses just off Myrtle Avenue. A 43-year-old man and a 39-year-old man were shot in the head and pronounced dead at the scene. A 76-year-old man was shot in the abdomen and died at Methodist Hospital. Police are questioning one person in the shootings, but so far there have been no arrests.

"It is in the best interest of our community that those who see anything step forward," community activist Tony Herbert said.

Investigators are still searching for answers to bring justice, but they can't bring loved ones back to life. Eyewitness News spoke with the brother of one of the victims, who was too distraught to go on camera. But he did say his brother died too young, and that gun violence has to stop.
Related topics:
shootingchild shot
Copyright © 2022 WABC-TV. All Rights Reserved.
TOP STORIES
Woman killed while pushing stroller believed to be targeted: sources
Body of missing man recovered in water near Long Beach
Vintage Burger King found behind wall inside Delaware mall
New York to limit where guns can be carried, Hochul says
Supreme Court overturns Trump's 'Remain in Mexico' policy
Cement truck slams into liquor store in New Jersey
Jackson sworn in as 1st Black woman to sit on Supreme Court
Show More
AccuWeather: Very warm
Texas woman accused in cyclist death arrested in Costa Rica
Judge lifts Trump's contempt order after 2-month legal fight
Flag pole with American, POW flags cut down outside NJ VFW
Delta pilots picketing at JFK, airports nationwide in contract push
More TOP STORIES News