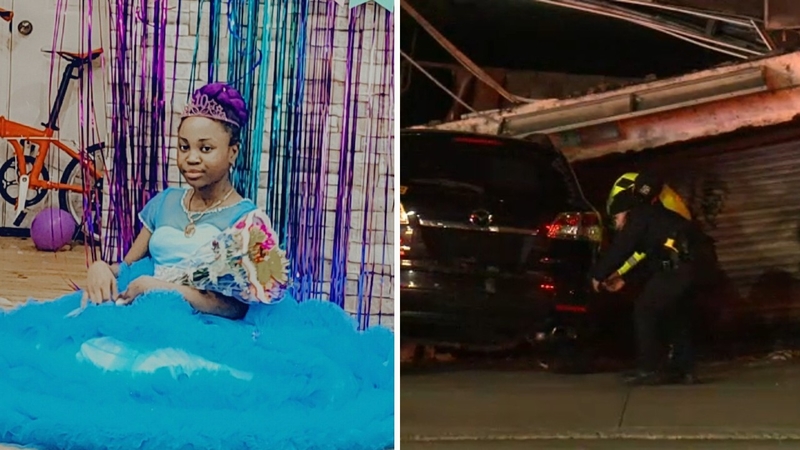 FAR ROCKAWAY, Queens (WABC) -- The 34-year-old driver who killed a 10-year-old girl and injured another pedestrian was driving with a learner's permit when she crashed into a car wash in Queens.

Detectives have recovered surveillance video that shows the driver failed to negotiate the turn and accelerated as she struck the pedestrians and crashed into the vacant car wash.

The driver struck and killed 10-year-old Davina Afokoba while she was walking home from school. A 33-year-old pedestrian who was also struck is expected to survive.

Two other pedestrians, a man, and a young boy, were able to get out of the way of the out-of-control car in time.

On Thursday, Afokoba's mother was determined to walk back to the crash scene.

So far, no charges have been filed against the driver as many questions are left unanswered.

For one, was the driver alone in the vehicle -- which is not allowed under DMV regulations.

"That is the moral of all of this, so that innocent children will not be snatched away from us so soon, we beg the city, the community, the police to do more work on that," said the victim's aunt, Tamata Davo.

Reverend Mullings, President of Challenge Charter School, said that 10-year-old Davina is a 5th grader at his school.
The school is providing grief counselors for both students and teachers. They are planning on having a vigil at a future date.

This is the same school 10-year-old Justin Wallace attended. He was shot and killed last summer.

In a community with many traffic problems, the loss of 10-year-old Afokoba is unimaginable.

"We have seen in 2021, I think it's one of the highest fatality years, and now we're coming into 2022 with loss of life," said NYC Councilmember Selvena Brooks-Powers.

A meeting is planned with the city's transportation commissioner next week.