Activists are demanding action against the New York City carriage horse industry following the death of a horse that collapsed this summer. Sandra Bookman has the story.

NEW YORK CITY (WABC) -- The death of a carriage horse has sparked a protest as activists renew calls for outlawing horse-drawn carriages in New York City.

On Tuesday, protesters returned to Hell's Kitchen and they say they were determined to not let Ryder's death there be in vain.

"Ryder's a symbol for how abusive the carriage industry is," said NYC Councilmember Robert Holden.

Back in August, at the corner of 45th Street and 9th Avenue, the elderly carriage horse collapsed and the disturbing scene was caught on video.

The frail animal was ultimately retired, but word came Monday that he had to be euthanized because of ongoing health issues.

"The problem is bigger than one sick, elderly horse who is being worked to death," said Edita Birnkrant with NYCLASS.

Activists who gathered Tuesday support a bill before City Council that would replace the horse-drawn carriages with electric versions.

It's a horrifying thought for many long-time carriage drivers.

Christina Hansen is the spokeswoman for the industry and a driver herself. She insists the horses are well-protected and the business is regulated.

"Horses do unfortunately, get sick they get old, they pass away," she said.

But activists insist the only real way to honor Ryder is to shut down the industry they believe killed him. 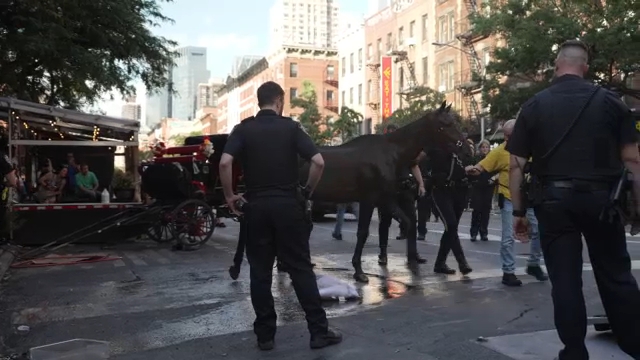 Horse that collapsed this summer in Manhattan has been euthanized