Pennsylvania couple says they were racially profiled by state police 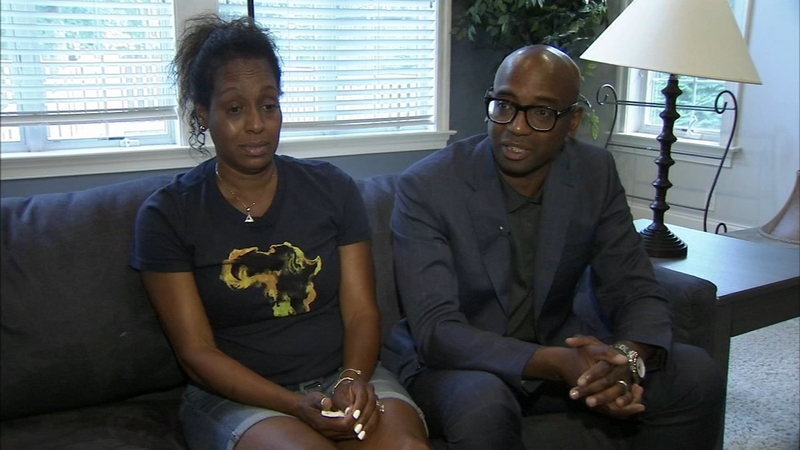 CHADDS FORD, Pennsylvania -- A senior executive with pharmaceutical giant Astra Zeneca says he and his family were racially profiled by Pennsylvania State Police during a traffic stop while on their way back to their Chadds Ford, Delaware County home.

Rodney Gillespie told our sister station WPVI-TV about the ordeal that he, his wife Angela -- both 52 -- and their 17-year-old daughter allegedly went through at the hands of the police.

"It was just a terrifying experience. It was embarrassing, it was just humiliating," Rodney said.

It was around 12:30 a.m. on July 8 that they were returning home from a family gathering in New Jersey. Their story was first reported by the Philadelphia Inquirer.

Rodney Gillespie was pulling up to his upscale neighborhood when he noticed flashing blue and red police lights behind him.

Because the road was too narrow to pull over, he decided to drive slowly up to his home and see why he was being pulled over.

Chadds Ford couple says they were racially profiled during traffic stop. Dann Cuellar has more on Action News at 11 p.m. on August 1, 2019.

That's when 23-year-old Trooper Christopher Johnson, who'd been on the job about two months, shouted a barrage of questions at him, according to Rodney.

"He said, 'Why didn't you stop?' And I told him I was scared. I was afraid as a black man, it was unsafe and I did not want to get shot. And he said something to the effect, 'Don't give me that,'" Rodney said.

Rodney said the trooper, who is white, then pulled him out of the car and handcuffed him as three other troopers soon arrived, shouting even more questions as he calmly tried to explain that he lived at the home.

Angela Gillespie said she was listening to all of this from inside the car.

"Sitting there with my hands up, lights on, I say, 'Oh my God.' So I was too afraid to bend down and get my phone out of my purse, it was underneath my lap. I didn't want to move, I was afraid that I wouldn't live," she said.

After 10 minutes, ultimately, the troopers confirmed that the couple and their 17-year-old daughter did in fact live at the home.

They un-cuffed Rodney. But Trooper Johnson then wrote Rodney a $142 ticket for crossing a yellow line as he tried to turn off Webb Road onto Atwater Road and a $102 ticket for not stopping right away.

But that still did not explain why Johnson was following them from Baltimore Pike near Harvey Road.

The Gillespies believed they were racially profiled.

"It was just driving while black, unfortunately. It's unfortunate that it's still occurring in this day and age," said Rodney.

The Gillespies filed a complaint with state police who said they are investigating the matter, but could not comment further. A full statement is below.

"I have a nephew who is a police officer in New Jersey. We have friends who are police officers for the State of New Jersey, so we have a lot of respect for what they do and the difficulty of their job, but just like anything else, they need to be properly trained," Rodney said.

Rodney, who has recently worked in Britain and South Africa, said he built his family's home in Chadds Ford in 2007.

The NAACP representative for this section of the Delaware Valley, Rev. Kyle Boyer, told WPVI-TV they are also looking into the matter.

Due to the nature of the ongoing Internal Affairs Department investigation, we cannot comment on specifics of the incident.

However, the Pennsylvania State Police takes any allegations of racial profiling or bias-based policing very seriously. If a complaint is received, it is thoroughly investigated by the Bureau of Integrity and Professional Standards. In addition to the internal affairs findings and subsequent adjudication process, the commander of the Heritage Affairs Section, Equality and Inclusion Office, reviews every investigation and weighs in on the adjudication process.

Every cadet receives a segment of training entitled "Racial Profiling and Biased Based Profiling Awareness and Prevention." The training emphasizes that the detention, interdiction, or other disparate treatment of any person on the basis of their racial or ethnic status rather than on the basis of reasonable suspicion is strictly prohibited and is in violation of state police and commonwealth policy. The training contains information on the origins and definitions of racial profiling, state police policy prohibiting racial profiling, and the negative impact racial profiling has on the community. In addition, cadets receive training in cultural diversity. These specific classes are taught by a commissioned officer (rank of Lieutenant or above). Liquor Enforcement Officers also receive this training. Internal regulations strictly prohibit racial profiling.