VIDEO: More than 100 birds dead, another 100 injured after flying into NASCAR Hall of Fame 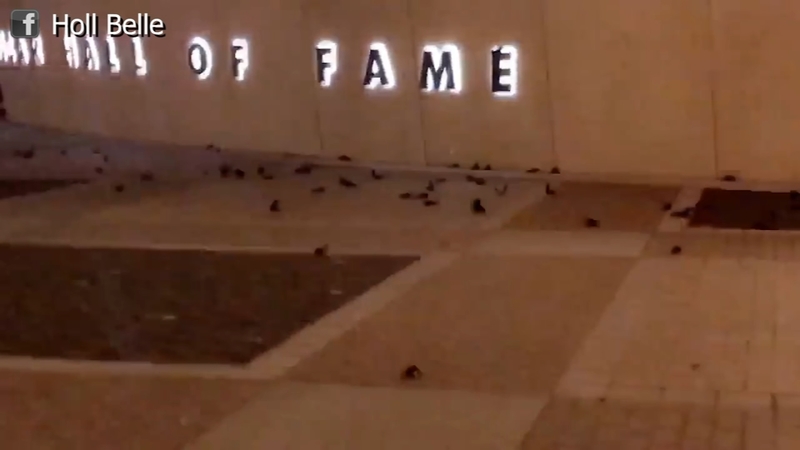 Hundreds of birds fly into side of NASCAR Hall of Fame

CHARLOTTE, N.C. -- A shocking video shows hundreds of birds lying on the ground after slamming into the side of the NASCAR Hall of Fame in Charlotte on Tuesday night.

Hollie Cameron recorded cellphone footage of birds striking a large wall of windows on the side of the building and later showing scores of birds lying on the ground outside.

This video shows images of birds that are either injured or dead. This video contains strong language. Viewer discretion is advised.

The Carolina Waterfowl Rescue responded to the scene around 11 p.m. The organization said 310 Chimney Swift birds hit the window of the building. Roughly a third of which were dead on arrival, another third were seriously injured suffering from broken wings, legs and other fractures.

The bird rescue organization posted an update to Facebook on Wednesday morning saying 205 of the birds were alive when staff arrived.

"I knew the birds would be here this morning. And I saw the video, it's quite shocking. It's not something common, right we know it has happened before but not something that happens all the time," Maria Brenez, with Carolina Waterfowl Rescue told WSOC.

Carolina Waterfowl Rescue officials told WSOC that it was not a naturally occurring event and believe something disturbed the colony Tuesday night, causing the birds to fly into the windows of the building.

The organization plans to release the other third of birds in a few days.

The Carolina Waterfowl Rescue said nursing the birds back to health can be an expensive task and is asking for donations to properly feed the birds and fund staff who have worked overtime.

Chimney Swifts eat up to 12,000 mosquitoes, termites, flies and other insects a day, according to Carolina Waterfowl Rescue.