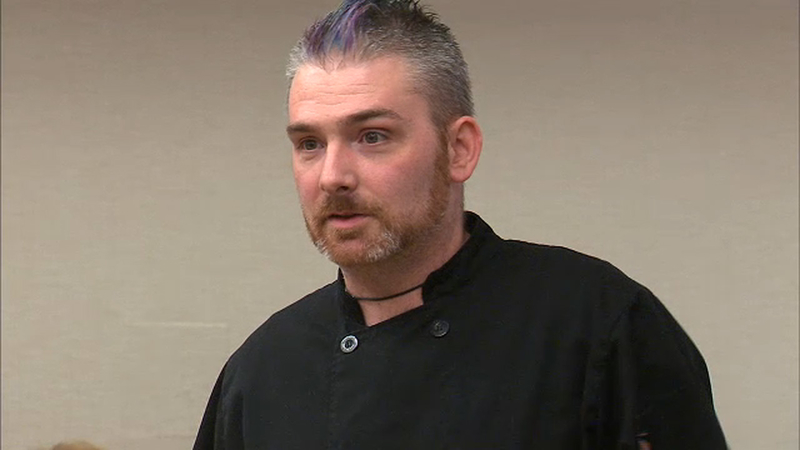 PARAMUS, New Jersey (WABC) -- Chris Holland was an up-and-coming chef in New Jersey when a sudden illness and then an opioid addiction derailed his dreams. He is now clean and giving back to the rehab center that helped him get on track and offered a second chance at life.

He has since become a successful chef who has gained notoriety for his love of food science, despite the fact that he was once an addict. He is a college graduate who had a career, but his life spiraled out of control after he lost feeling in his lower body.

He was diagnosed with Multiple Sclerosis and began taking prescription opioids. He thought his life was over.

"I thought I was going to be in a wheelchair in two years," he said. "I thought I got a raw deal. I thought, 'The universe hates me, and I'm just going to do what I want to do.'"

Holland compares his addiction to being pulled into the ocean by a strong current.

"Before you know it, you're a mile out off shore," he said "That's how addiction works. It works until it doesn't work, and you ask, 'How did I get here?'"

So he checked into the treatment program at the New Bridge Medical Center to begin the toughest challenge of his life. The staff had to encourage him every day to stay, and he did.

"I knew that I needed help eventually," he said. "I knew that my life was in ruins, but I had no idea until I saw it with sober eyes...When I walked out of this hospital, I saw the nuclear wreckage that is my life."

Holland has won cooking competitions on the show "Chopped," and he's fought off his personal demons to become drug free.

"That's incredibly gratifying to be part of the recovery," New Bridge president and CEO Deborah Visconi said. "And sustaining that recovery for someone in our community is exactly why we are here."

New Bridge is the largest drug recovery facility in the state, with 84 treatment beds. Officials there say addiction is a disease, but it's up to individuals to get help. They are ready to guide addicts like Holland to a productive life.

"We work in a field that when you have success the feeling is indescribable," addiction services director Michael Paolello said.