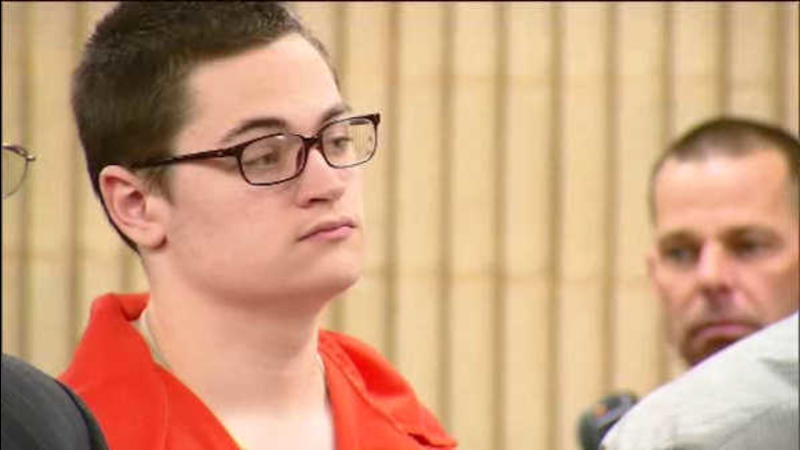 MILFORD, Connecticut -- A teenager was sentenced Monday to 25 years in prison for fatally stabbing a classmate after she turned down his invitation to the junior prom.

A judge handed down the sentence to 19-year-old Christopher Plaskon in Milford Superior Court. He pleaded no contest to murder in March in the killing of 16-year-old Maren Sanchez inside Jonathan Law High School in Milford on April 25, 2014, the day of the prom.

Sanchez's parents said after the hearing that they were frustrated that the prison sentence wasn't longer. Plaskon will be eligible for parole in 13 years under new state juvenile sentencing laws.

"The message that it sends is that if you commit a crime as heinous as murder in the state of Connecticut, you're going to do very little time, you're going to walk out with a college degree and you have your life back at one point," said Sanchez's father, Jose Sanchez. "And it's not the message that we want to send to the children in our schools when this has become an epidemic throughout the country."

He added, "I never get my daughter back. My daughter will always be dead."

While prosecutors said there was evidence from several sources that the attack was prompted by Sanchez's rejection of Plaskon's prom invitation, Plaskon's lawyer, Edward Gavin, said the stabbing wasn't related to the prom. Family and friends of Plaskon told police he was upset with Sanchez for rejecting his invitation.

Plaskon's lawyers have said he showed signs of psychosis and they considered an insanity defense.

The attack happened in a first-floor hallway at about 7:15 a.m. Students described an emotional scene where people were crying as police and paramedics swarmed the school.

A witness tried to pull Plaskon off Sanchez during the attack, and another saw Plaskon discard a bloody knife, according to an arrest warrant affidavit. Plaskon was taken to the principal's office in bloody clothing and told police, "I did it. Just arrest me," according to the affidavit.

Staff members and paramedics performed life-saving measures on Sanchez, but she was pronounced dead at a hospital shortly afterward. The medical examiner's office said she was stabbed in the torso and neck.

Sanchez, a member of the National Honor Society who was active in drama and other school activities, had been focused on prom in the days before she was killed. She had posted on Facebook a photograph of herself wearing a blue prom dress and was looking forward to attending with a new boyfriend.

Sanchez's parents are suing Plaskon, his parents and the Milford school system. The lawsuit says Sanchez told a guidance counselor that Plaskon was troubled and capable of hurting others. School officials have declined to comment.