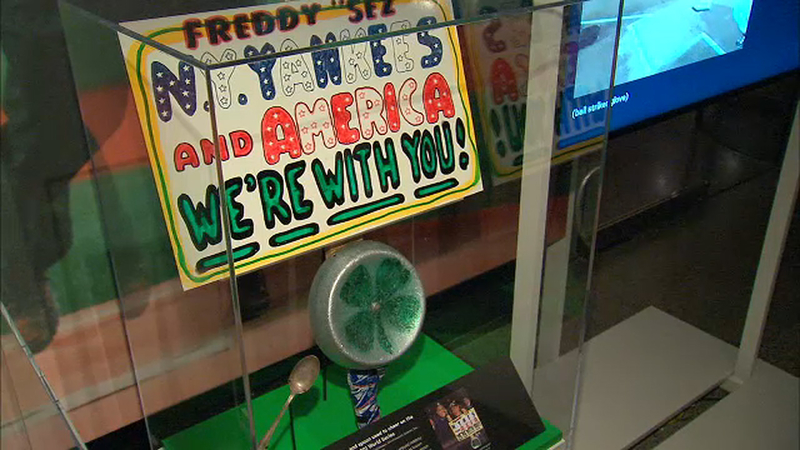 This year, the the National September 11 Memorial & Museum is taking a look at the role sports played in comforting the nation in those dark weeks after the towers fell.

"Sports are deeply meaningful to individuals, and sports are also a collective venue for people to come together and express their emotions and share a love of something," Executive Vice President Clifford Chanin said.

Now, "Comeback Season: Sports after 911" reveals how teams and players in the biggest sports venues played a critical role in the healing process, beginning with a prayer service at Yankee Stadium.

"Transformed for the purpose of commemoration of grieving and mourning," he said.

Chanin is the deputy director for museum programs and part of the creative team, and he gave Eyewitness News a preview of this special collection of memorabilia -- intimate personal stories, pictures, and videos beginning with the Mets first game on September 21.

"It was also the first large public gathering in New York after 9/11," he said. "And there was a real concern, was it safe?"

It was Mike Piazza's game-winning home run that defined a special moment, wearing a jersey that is now on display at the museum.

"It's about this sense of relief and joy and a sense of solidarity," he said. "We love the jersey. We love Mike's helmet too. John Franco wore the FDNY cap."

And who can forget the World Series, with the Yankees coming home for game three and President George Bush taking the mound and drilling a perfect ceremonial pitch.

"This integration of the traditional ceremonial with things being transformed because of what happened on 9/11," Chanin said.

"To really make the point that we will go on," Chanin said.

It truly is a comeback season, one that brought a city and a nation together.

ESPN has produced a special, also called "Comeback Season: Sports after 9/11," produced in conjunction with the National September 11 Memorial & Museum. It is hosted by Mike Greenberg, host of the ESPN weekday morning show "Get Up!"

The 90-minute program will include interviews, features and memories from athletes, coaches, families and others whose stories marked key emotional milestones in sports following the 9/11 attacks.