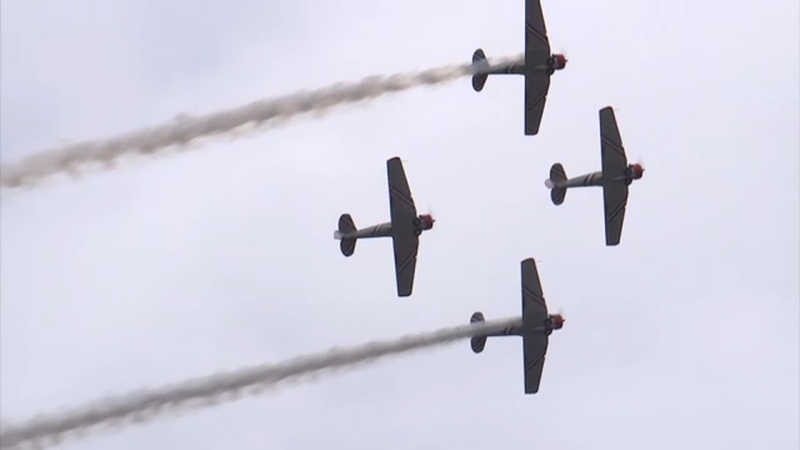 Weekend rain washed out the planned shows on Saturday and Sunday for the first time in its 17-year history, so the organizers held a special show for the holiday.

RELATED: Watch "Kickoff to a Long Island Summer" with the Eyewitness News team

The United States Air Force Thunderbirds, one of the event's biggest draws, closed out Monday's show with a dazzling performance.

The weather cleared up, so the #BethpageAirShow at Jones Beach continues today and we’re excited to perform! We’re scheduled for a 1:50 p.m. SHOWTIME 🗽 pic.twitter.com/CFwFOScrvz

"I'm tremendously grateful for all the partners, performers, and staff who are pulling together to make Monday's show happen," said State Parks Commissioner Erik Kulleseid. "We're excited for the traditional summer season at Jones Beach, starting with the Bethpage Air Show."

"All of the agencies involved, without a hesitation, they said, 'Yes, we will be there - same commitment, same resources,'" Gorman said.

Gorman said those with Air Traffic Control at JFK Airport, as well as the Federal Aviation Administration, immediately approved the new date.

To accommodate a 3-hour show instead of a typical 5-hour show, fewer performers participated.

Parking passes from the Saturday and Sunday canceled shows were honored, as well as the passes for health care heroes and General Admission tickets as well.

Show organizers didn't think they would get close to 50 percent capacity.

The weather may have helped with that. Although there were peaks of sunshine, it was still a bit chilly.

People wore many more layers than they're used to on Memorial Day.

"(We were) supposed to come on Saturday but obviously it got rained out. But that's ok. We're coming today. It's freezing and we'll have fun," Laurie Schour of Franklin Square said.

Last year's show was canceled due to the pandemic.

The @A10DemoTeam can loiter near battle areas for extended periods of time and operate in low ceiling and visibility conditions. #BethpageAirShow 🛩 pic.twitter.com/ZPrr8E2J1J