Exclusive: Man speaks out after e-cigarette explodes in mouth 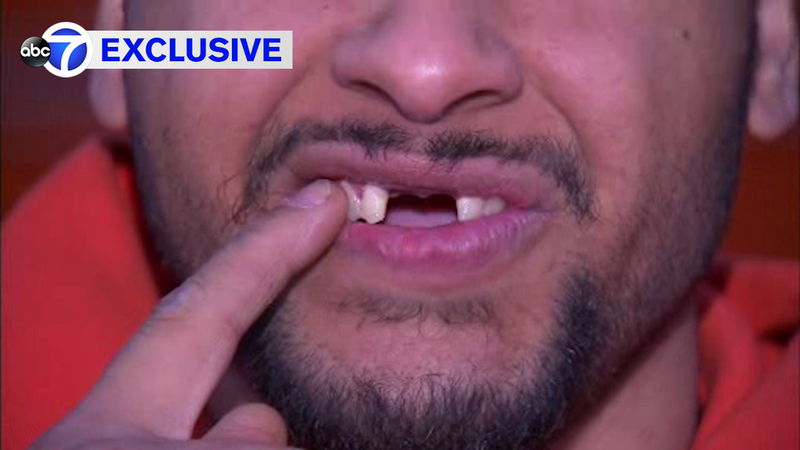 STRATFORD, Connecticut (WABC) -- A man from Connecticut who was badly injured by an exploding e-cigarette spoke out exclusively to Eyewitness News.

The explosion happened while he was smoking.

"The vape decided to blow up. I didn't know what happened until five minutes later. When I was on the floor, I woke up, I was unconscious, I was missing two teeth, my hand was black from the smoke of the vape blowing up," said Manny Almodovar, the victim.

Almodovar is back to work and feeling better, but still in need of dental work.

He was in the hospital a few weeks ago after the electronic cigarette he was smoking exploded in his mouth.

"I remember pressing the button to take the hit, but as soon as that happened, I don't remember anything else. My coworkers actually saw it fly from my teeth all the way 20 feet in the air," Almodovar said.

In all, four teeth were damaged and his hand was charred from the smoke.

The 24-year old is one of a growing number of victims injured by e-cigarettes that have either exploded or caught fire. In most cases the battery is too blame.

"They call it thermal runaway, which is a chain reaction and once it starts you can't stop it," said Lt. Robert Daniel, Stratford Deputy Fire Marshal.

The problem, Lt. Daniel says, is cheaply made aftermarket batteries can short circuit in milliseconds.

E-cigarettes are now banned from checked luggage on flights because of fire concerns.

There have been at least 92 documented explosions, not including Almodovar's.

"He had an angel looking over him, because it was basically an explosion in his mouth. It could have had deadly consequences," Lt. Daniel said.

E-cigarettes are now a multi-billion dollar industry, but Almodovar says he's out and has given up vaping altogether

"I never knew that something like that could happen. It was shocking to me when it did happen. I had no idea that something like that could happen at all," Almodovar said.
Related topics:
stratforde cigarettesexplosionvaping
Copyright © 2022 WABC-TV. All Rights Reserved.
TOP STORIES
19 children, 2 adults killed by gunman in TX school shooting
Uvalde school shooting: What we know about 19 kids, teacher killed
Jersey City police fatally shoot man after report of shots fired
Live | Eyewitness News 24 x 7
Fleet Week New York returns to the Big Apple
AccuWeather: Sun and clouds with a cool breeze
'People are getting numb': Texas mom reacts to mass shoot at school
Show More
A look at some of the deadliest US school shootings
Rep. Antonio Delgado to be sworn in as NY lieutenant governor
Biden to sign policing order on anniversary of Floyd's death
Biden addresses nation on 'horrific' Texas school shooting
Alleged shooter in unprovoked subway murder surrenders
More TOP STORIES News