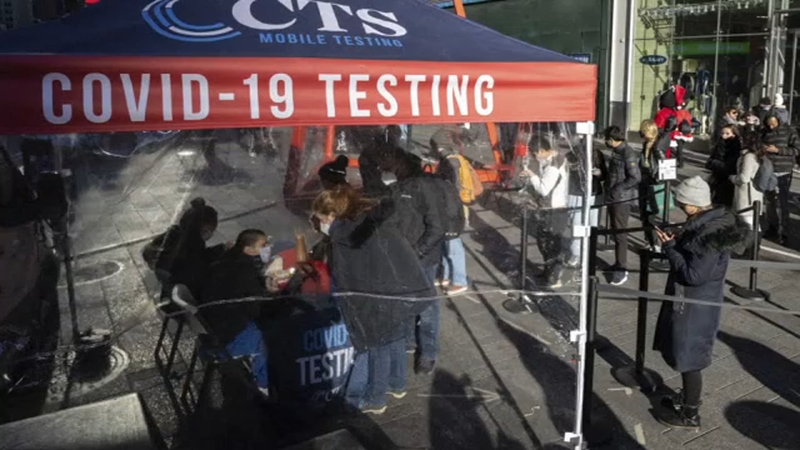 NEW YORK (WABC) -- There's a bit of relief for some health care workers nationwide as the U.S. shows signs it's turning a corner on the omicron surge.

Hospital admissions were down by more than 11% in the last week.

New infections also dropped more than 32% over the past two weeks.

However, there were still more than 3.8 million new cases reported last week in the country.

Moderna gains full FDA approval
U.S. health regulators on Monday granted full approval to Moderna's COVID-19 vaccine, a shot that's already been given to tens of millions of Americans since its emergency authorization over a year ago. The action by the Food and Drug Administration means the agency has completed the same rigorous, time-consuming review of Moderna's shot as dozens of other long-established vaccines. The decision was bolstered by real-world evidence from the more than 200 million doses administered in the U.S. since the FDA cleared the shot in December 2020. The FDA granted full approval of Pfizer's vaccine last August.

NYC Public Schools isolation rules change
The NYC Department of Education reduced the isolation period for all staff and students in kindergarten and older to just five days, down from 10 days. Students can return on Day 6 as long as they have not had a fever for at least 24 hours and are wearing a "well-fitting" mask, which all students and staff members are already required to do. The isolation period remains at 10 days for kids younger than 5.

Joe Rogan responds to Spotify protest, COVID advisories
Following protests of Spotify kicked off by Neil Young over the spread of COVID-19 vaccine misinformation, the music streaming service said that it will add content advisories before podcasts discussing the virus. In a post, Spotify chief executive Daniel Ek laid out more transparent platform rules given the backlash stirred by Young, who on Wednesday had his music removed from Spotify after the tech giant declined to get rid of episodes of "The Joe Rogan Experience," which has been criticized for spreading virus misinformation. Rogan also responded to the fallout, saying in a video on Instagram that he was only seeking to have conversations on his podcast with people who have "differing opinions."

Boris Johnson says sorry after report slams lockdown parties
Prime Minister Boris Johnson apologized Monday after an inquiry found that Downing Street parties while Britain was in lockdown represented a "serious failure" to observe the standards expected of government or to heed the sacrifices made by millions of people during the pandemic. But Johnson brushed off calls to quit over the "partygate" scandal, promising to reform the way his office is run and insisting that he and his government can be trusted.

"I get it, and I will fix it," he said in Parliament after senior civil servant Sue Gray published interim findings on several gatherings in 2020 and 2021 while the U.K. was under