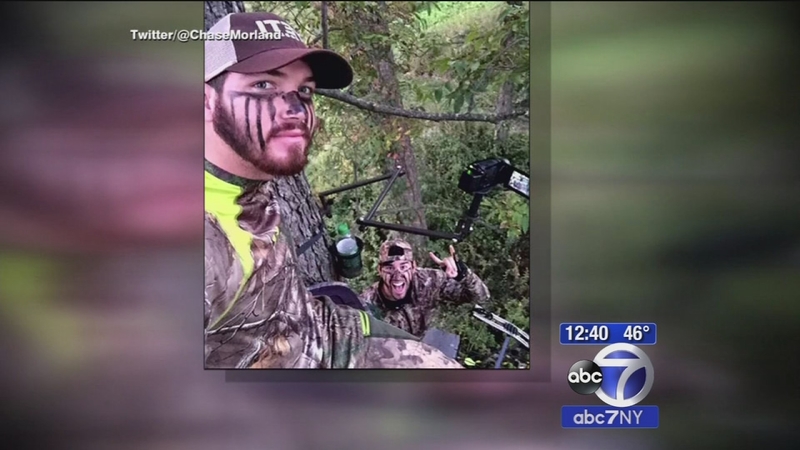 TULSA, Okla. -- Rescuers searched Tuesday along a 38-mile long lake in northern Oklahoma for an Arkansas country singer who disappeared while duck hunting with a friend in severe weather.

In case we don't come back, @BackroadCRAIG and I are going right through Winter Storm Goliath to kill ducks in Oklahoma. 😅 #IntoTheStorm

Searchers found the men's capsized boat in a lake in Kay County.

A search is underway for a country singer who went missing during a hunting trip in Oklahoma.

Strickland was believed to be on the boat with Morland. On Monday, troopers recovered Morland's body from the lake.

Authorities returned to massive Kaw Lake, which nearly stretches into Kansas, in attempts to find Strickland of Springdale, Ark.

Strickland is the lead singer of the Arkansas-based country-rock band Backroad Anthem. The band posted a Twitter message Tuesday from Strickland's father, Randy, who reported that the family was at the Kay County Sheriff's Office, where the power was out and running on a generator. Randy Strickland did not immediately return a message at his Oklahoma address seeking comment but said in the online post that Craig Strickland's dog, Sam, had been found.

The expansive terrain, coupled with the severe storms that pounded the area over the weekend, hampered rescue efforts, said Oklahoma Highway Patrol Capt. Paul Timmons. The severe rains and flooding are blamed for at least five deaths in Oklahoma and more than 100 injuries, according to state health officials. On Monday, Gov. Mary Fallin declared a state of emergency after blizzard conditions affected parts of the state and heavy rains fell.

Kay County Sheriff Everette VanHoesen said the enormity and unpredictable nature of the lake catches many inexperienced boaters by surprise.

"It's a big lake, and when we have high winds, the lake will get whitecapped; the waves get pretty big," VanHoesen said Tuesday. "I understand these men were avid hunters. They knew what they were doing, but sometimes the size of our lake really tricks them."

A message posted to Morland's Twitter account before the pair set out read: "In case we don't come back, BackroadCRAIG and I are going right through Winter Storm Goliath to kill ducks in Oklahoma. #IntoTheStorm."

Strickland is married to former Miss Arkansas Helen Wisner, who posted a message on her Twitter account reading, "We love you Craig Michael. Come home."