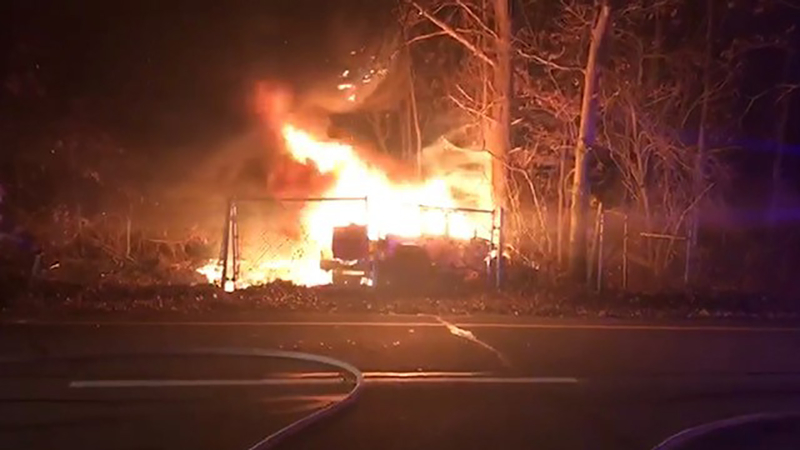 RONKONKOMA, Long Island (WABC) -- Two Long Island men are being hailed as heroes after they saved the life of another man whose car burst into flames after he veered off the road.

Joe Desena and Sanjeev Verma pulled the male driver out of the car just seconds before it was fully engulfed.

The accident happened around 5:15 p.m. Wednesday along Express Drive North in Ronkonkoma. Authorities say the driver, 29-year-old Wade Ungar, of Middle Island, swerved to avoid hitting another vehicle and crashed into a tree.

Desena said he was on his way home from his security guard job when he saw the accident happen right in front of him. He said he saw the car swerve to the right and almost hit a telephone pole, and then swerve to the left, going through a fence and head-on into a tree.

"I saw the cloud of smoke," Desena said. "I think it was from the airbags at first. I realized, I have to get this guy out."

Desena immediately began waving down motorists to help, and that's when Verma -- a father of two from Medford on his way to driving for Uber in Manhattan -- pulled over.

Verma said he and Desena tried to get the victim to open the door, but he was unconscious and the door was jammed. So Desena used a tire iron and broke the driver's side window, allowing him and Verma to pull the victim out.

Verma said Ungar woke up and thanked them as they were dragging him away from the flames,

"Everyone should help and stop and save the life," Verma told Eyewitness News reporter Kristin Thorne.

Verma's son, 19-year-old Kunal Verma, said he is incredibly proud of his father.

"He just has that personality," Kunal Verma said. "Always helping people, family, friends whoever it is, he will always, no matter, he will go out of his way to help someone."