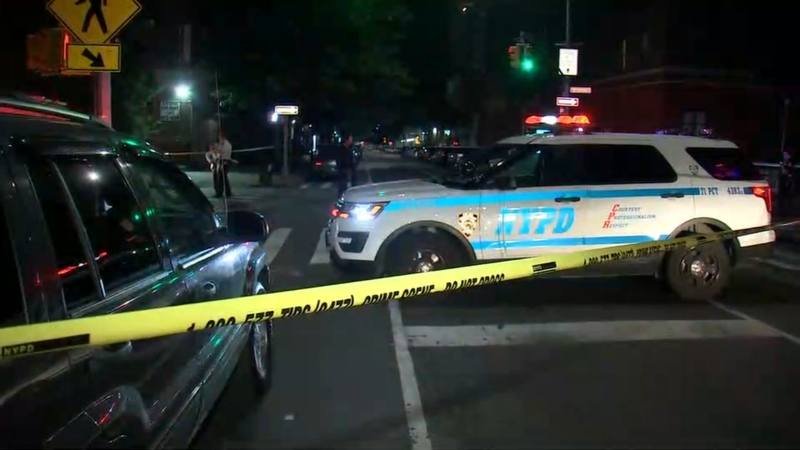 CROWN HEIGHTS, Brooklyn (WABC) -- One person is dead and five others injured after three gunmen opened fire on them in Crown Heights, Brooklyn, in the latest incident of gunfire in the borough.

The victims were part of a group of 10 to 12 people hanging out on President Street, near Franklin Avenue, when shots were fired just after 2:15 a.m. Wednesday.

#breaking 6 people shot in Brooklyn. At least 1 dead. At least 4 shot at President St/Franklin Ave just after 2 am. 2 More victims discovered at the hospital possibly from a different location #abc7NY pic.twitter.com/t5Pmp2hgej

One neighbor said she heard several gunshots and recognized the young victims from her window.

"I immediately ran downstairs and I saw one of the boys I know in the car and i just started to pray." she said. "I just needed to pray for them."

Two were taken to Methodist Hospital, two others taken to Kings County Hospital, all in stable condition.

While at Kings County Hospital, police encountered a woman, shot in the leg, who had driven a shot man to the hospital for treatment.

Update: police now believe all the victims were shot in the same location after discovering those two additional victims at the hospital

The two were also shot while on President Street.

Witnesses told police up to three gunmen approached them, opened fire, and then fled on foot. No arrests have been made.

Neighbors say this formerly violent neighborhood has been turned around in recent years, and they don't want it to go back.

"We used to see bodies on the ground, I did," one resident said. "One night, for example, I heard shots and there was a body, a young person right on the ground, so i wouldn't want that to happen ever again."

NYPD Chief of Detectives Rodney Harrison said they want to know if this was yet another gang shooting.

"60 to 70 percent of our shootings right now have a gang nexus to it, where this surge is from," he said. "I really can't speak about it right now, but we have to find a way to really suppress the gang violence that's really plaguing the city."

The violence comes after a rash of shootings in the borough and on the same day as an anti-violence march is planned.