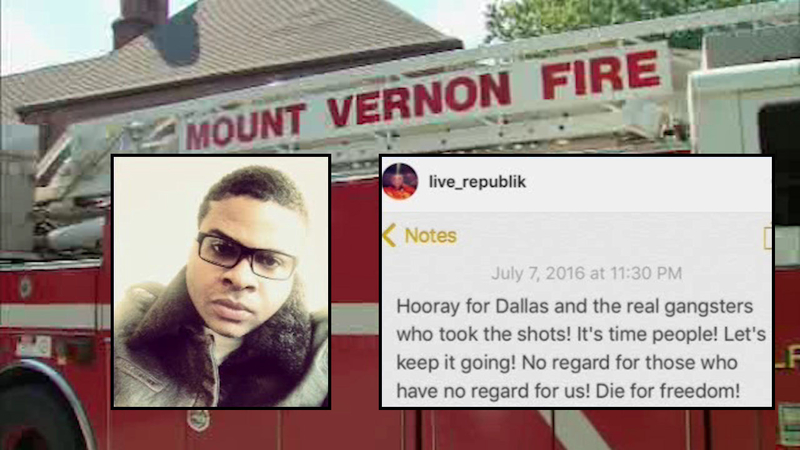 MOUNT VERNON, New York (WABC) -- A firefighter is under fire in Mount Vernon for appearing to support the gunman in Dallas who killed five police officers.

He's been suspended for a message he posted on Instagram after the ambush.

Mount Vernon's fire commissioner isn't hiding his disappointment when it comes to one of his men.

Lieutenant Omar Lanier is a subordinate, but a firefighter who also rose through the ranks in the small department whom the commissioner knows personally.

"Omar is a great guy, me as the commissioner and as a firefighter I work alongside him, you know, we were in fires together and in the firehouse, he's a great guy. I think it was just a lapse in judgment on his part," said Commissioner Ernie Richardson, Mount Vernon Fire Department.

At issue is a message on Instagram attributed to Lanier, posted July 7th, the night a dozen Dallas police officers were shot, five of them killed in an ambush style assault.

The message reads, "Hooray for Dallas and the real gangsters who took the shots! It's time people! Let's keep it going! No regard for those who have no regard for us. Die for freedom!"

Reaction among law enforcement groups has been swift.

"I do understand the tension between the black community and the law enforcement with police brutality. I've been outspoken for the last 15 years about it, but I would never wish death to other law enforcement officers of any color," said Damon Jones, of Blacks in Law Enforcement.

Lanier, who was recently promoted to lieutenant, has been suspended without pay.

The Firefighters Union stresses it doesn't condone any calls for violence, but plans to meet with the eight-year veteran to map out a defense.