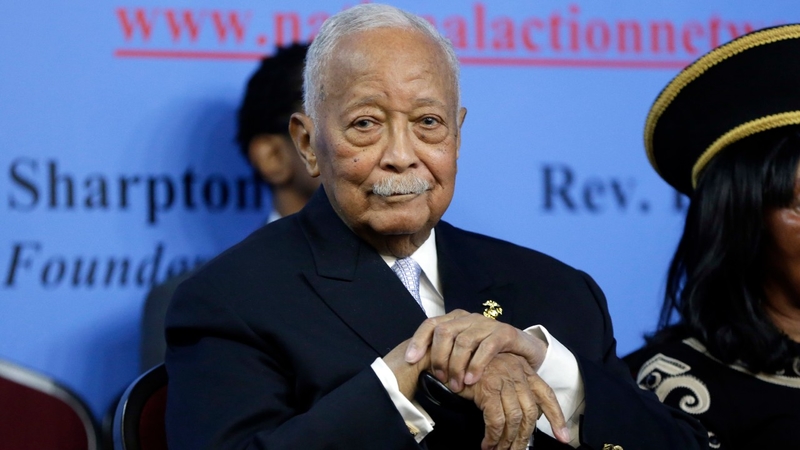 Police responded to Dinkins' home Monday evening, just after 9 p.m. after a 911 call came in from a home health aide who discovered him.

"As we mourn his passing, we cherish the legacy that he left behind. He showed us how to care for one another with dignity and grace. He fought for what he believed in and never compromised his principles."

Dinkins was the 106th mayor of the city and the first, and so far, only Black person to hold the office.
EMBED More News Videos

Dave Evans reports on the death of David Dinkins, who led the nation's largest city through some of its toughest times

He went from the New York State Assembly to becoming the Manhattan Borough President, and the pinnacle of his career was becoming mayor of New York City, making history in the process.

The Democrat ran against Republican Rudy Giuliani in 1989 and defeated him. They were matched against each other again in 1993 - that time, Giuliani won.

Dinkins would lead the nation's largest city through some of its toughest times economically, politically and socially in the early 1990s.

In August of 1991, just 18 months after he was sworn in as mayor, a Jewish driver hit and killed a 7-year-old African American child Gavin Cato.

Tensions quickly escalated and then they exploded when a group of young black men stabbed and killed Jewish student, Yankel Rosenbaum. The rioting lasted three days.

Dinkins came under intense criticism for not moving fast enough to stop the violence, but the mayor criticized the NYPD which he felt moved too slowly -- intentionally.

After the riots, the focus became reducing crime. Dinkins added more cops and hired Ray Kelly as NYPD Commissioner. Kelly would later be responsible for a huge increase in stop and frisk under the Bloomberg administration.

Violent crimes dropped, but Dinkins believed he never got credit for it.

As an historic figure himself, it was his job to welcome the history making Nelson Mandela to New York City soon after Mandela's release from years in prison after fighting South African apartheid.

Dinkins admitted several times over the years that goal of fostering racial harmony in New York fell short, but in his memoir, he wrote that he believed it was racism that cost him the election to Giuliani in 1993.

One of Dinkins' great accomplishments was expanding the U.S. Tennis Association in Queens and keeping the U.S. Open in New York for decades to come.

History-making probably wasn't on Dinkins radar when he grew up in both Trenton, New Jersey, and in Harlem.

His dad, a barber and real estate agent and his mom, a domestic worker separated when Dinkins was just six.

He tried to enlist in the Marine Corps as World War II was ending, but was told the corps had already filled its racial quote of blacks.

He searched the northeast until he found a recruiting station that had not.

For his service, he later earned a Congressional gold medal.

He met his wife Joyce at Howard University and he always referred to her as his bride.

The Dinkins family thanked everyone for their comforting thoughts, prayers and expressions of sympathy.

In lieu of flowers, they are asking that contributions and donations be made to the following: the Howard University Scholarship Fund, the Schomburg Center for Research and Black Culture, the Montford Point Marine Association, the Harlem Junior Tennis and Education Program and New York Junior Tennis and Learning.