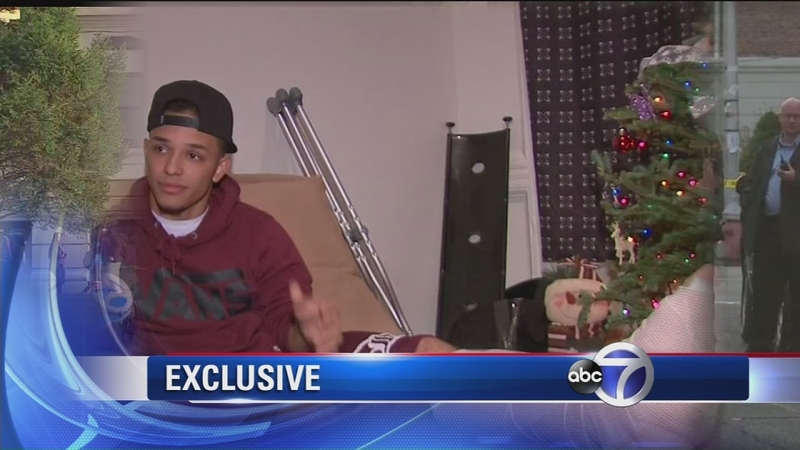 JERSEY CITY, N.J. (WABC) -- A teenager was shot after a fight at school spills into the streets of Jersey City.

That student spoke exclusively to Eyewitness News about how his life is changed forever.

That shooting at around 2 p.m. forced a lockdown at two schools as police searched for the gunman.

18-year-old Steven Sims is a senior at William Dickinson High School. There was a fight at the school earlier Tuesday, and students described it more as a brawl between two groups of students.

One of those students left school and about an hour later, Sims says he was in a supermarket across the street from the school.

He says that the fight that had broken out earlier continued on the street and that's when shots rang out.

"At first I felt it, but I didn't realize I was hit until someone told me that there was blood on my pants," Sims said.

Sims says there is now a bullet lodged in his leg forever and his bone is also broken.

It is apparently too close to his bones for doctors to remove it.

Sims says he was simply in the wrong place at the wrong time when the fight spilled into the street on Palisade Avenue.

Police: Dickinson High students were arguing before 1 was shot in leg a block from school https://t.co/DHEtGx6hUM https://t.co/bTM8NyvtC8

"I don't know, somebody has got to stop the guns from being sold I guess, however everyone is getting the guns around here, they have to stop," Sims said.

"The fact that a disagreement between two students at a high school can escalate to gun violence speaks to how outrageous our culture is today," said Mayor Steven Fulop in a statement. "Clearly, issues of open access to guns that plague every city in the country need to be addressed in the immediate future by Congress. Congress needs to act now to stop the flow of guns across state borders."

"I don't really want him to go to that school, I'm very nervous to make him go to school every day. It was the worst phone call of my life, and I don't know what else to say because I'm going to break down from it. It was a very bad day," said Kim Nisbet, Steven's mother.

Steven is expected to make a full recovery.