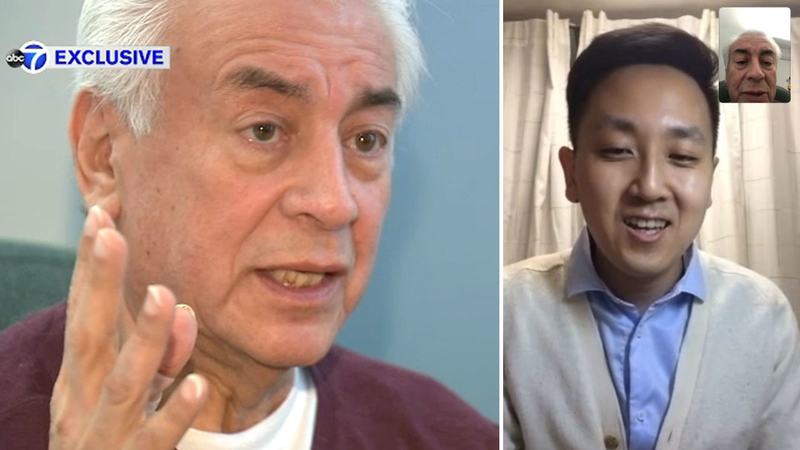 NEW YORK (WABC) -- When the doorman of a New York City hotel suffered a massive heart attack on the job, a total stranger was in the right place at the right time and knew exactly what to do.

"Thank you for everything. (You) saved my life."

These were the words from 72-year-old Miguel Morales from his hospital room at Mount Sinai St Luke's in Manhattan on Thursday morning.

The only reason he's still alive is because of a second-year dermatology resident from Seoul, South Korea, who was visiting New York and staying at the hotel where Morales has worked as a doorman for the last 35 years.

"We were checking in the hotel and someone was running, ran out of the hotel screaming for help," said 33-year-old Dr. Dokyoung Yoon via FaceTime from Seoul.

Just inside of the glass sliding doors of the Novotel on West 52nd Street in Times Square was Morales lying in the entryway, completely unconscious.

"According to my colleague I tried to shake him (his hand), I was his relief and then I fell. He thought I was joking," Morales said.

Yoon performed chest compressions and mouth-to-mouth resuscitation for 10 to 15 minutes, and continued his life-saving efforts until paramedics arrived.

"He was actually quite sick, it was a very turbulent few days," said Dr. Amir Ahmadi, a cardiologist at Mount Sinai St. Luke's.

In a matter of hours, the 72-year-old doorman suffered two heart attacks and two strokes.

Cardiologists at Mount Sinai St. Luke's used a specialized hypothermia cooling system to lower is body temperature to 32 degrees in order to protect his brain function. He also had stents put in his heart and an implantable defibrillator.

Now, his heart and brain function have drastically improved.

"He received very appropriate CPR and we are very thankful for the bystander and the physicians that were on the scene," Ahmadi said.

Morales and his daughter, Catherine David, desperately wanted to thank Yoon. They were able to do so after the hospital tracked him down.

With a face full of tears streaming down her cheeks, David said over FaceTime, "What the doctors told me, he was dead 10 to 15 minutes at least, and he came back because of you guys."

"I'm very thankful for getting the chance to help him," said Dr. Yoon." That day was one of the most important days of my life."