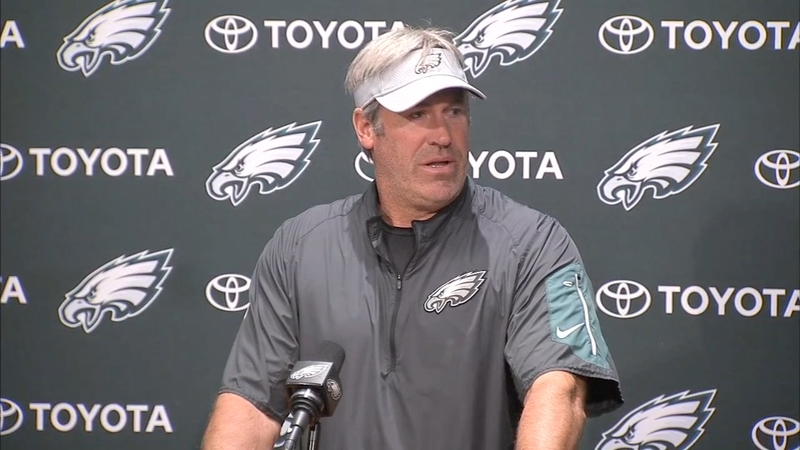 Eagles' head coach was looking forward to WH visit, but moving on

PHILADELPHIA -- A day after the Philadelphia Eagles were scheduled to meet with President Donald Trump at the White House before getting uninvited, head coach Doug Pederson says he was looking forward to it but the team is moving on.

"It's over. It's behind us. We're moving on," Pederson told reporters during a press conference at the NovaCare Complex in South Philadelphia Wednesday morning.

He started the Q&A session with a joke, "Glad to see so many people for an OTA practice," before issuing what he called a blanket statement on the White House subject.

Though he said that would be all he would say on the matter, reporters continued to ask him for reaction.

"What you've seen and what you've heard is enough. I'm not going to stand here and discuss it," Pederson said.

Pederson said the team's focus is now on the upcoming practices and their goal is the 2018 season. He said nobody was talking about the matter at Tuesday practice.

"We're united. We're a team. Been that way since I've been here," Pederson said.

A statement issued Tuesday by the White House Press Secretary said "the vast majority of the Eagles team decided to abandon their fans." Pederson had a message for all the Eagles fans.

“Eagles offered to send only a tiny handful of representatives, while making clear that the great majority of players would not attend the event”@6abc #whitehouse #trump pic.twitter.com/Ynq565fRNP

"We have the greatest fans in the National Football League. Our true fans, they're beside us. We're beside them. Love everything about the people that come and watch us, support us, whether it's in training camp or in the stadium. I can't say enough good things about what our fans have done for us, the support, the love we've felt all off season and we continue to feel," Pederson said.

When asked if future championship teams should still be invited to the White House, Pederson would not say what others should do.

He added, one last time, "I was looking forward to it."