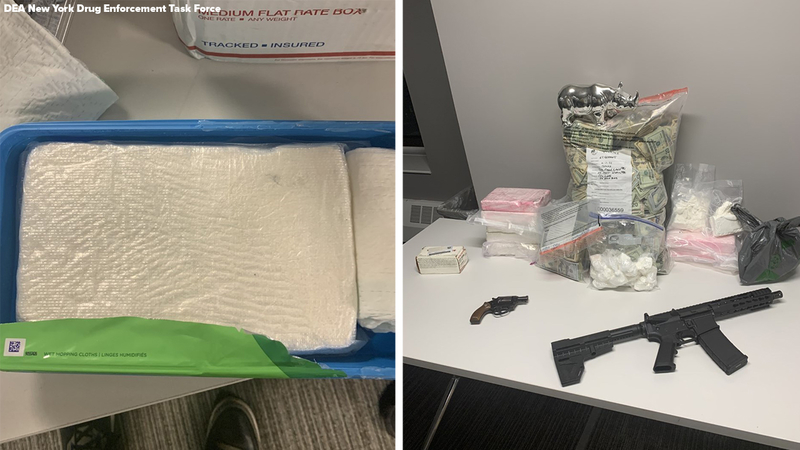 MORRIS PARK, Bronx (WABC) -- More than two dozen pounds of cocaine, along with guns and $350,000 in cash were seized during a narcotics bust in the Bronx.

Officials say an accused drug trafficker and two other people are under arrest and charged with a large-scale cocaine distribution operation in Morris Park.

DEA agents discovered over 10 kilograms of cocaine, worth an estimated street value of $3.5 million, $350,000 cash, a pistol and an assault rifle during a short-term investigation.

A drug bust on Long Island has been linked to a senior housing center in Nassau County.

"This case reflects the NYPD's continued effort to stop the trafficking of narcotics by targeting those most responsible," NYPD Police Commissioner Dermot Shea said.

Jose Velez is accused of overseeing the cocaine distribution network and faces multiple charges including operating as a major trafficker and criminal sale of a controlled substance.

Jordan Worthley and Melina Masullo are each charged with criminal possession of a controlled substance in the first and third degree.

A retired police officer was killed after he was shot in the torso during a confrontation in Brooklyn Monday night, police say.

Officials say some of the cocaine was discovered in a Swiffer box.

Police believe the drugs were mailed from Puerto Rico.