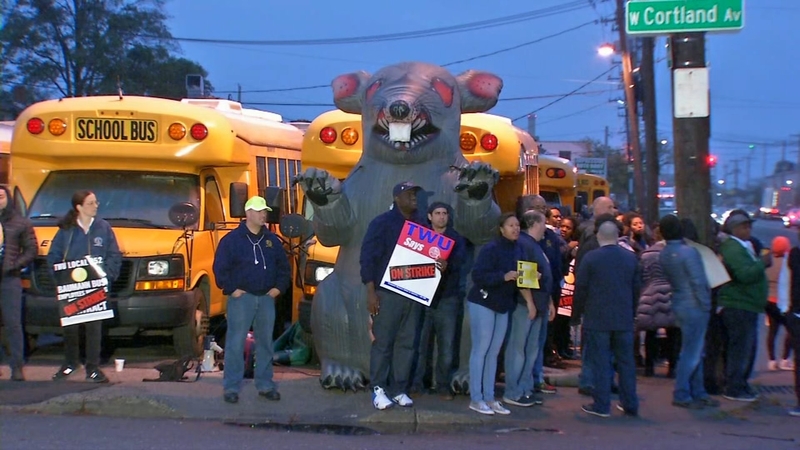 The strike affects thousands of students in the Freeport, Baldwin, Hicksville and Rockville Centre school districts.

Several private schools are also affected, as well as the New York City Office of Pupil Transportation, which buses some students in Queens and Brooklyn.

The districts say they are trying to work out alternative options for students.

Parents have been advised to find ways to get their children to get to school on their own.

Transport Union TWU Local 252 and Baumann & Sons Buses have been in ongoing talks for weeks in the contract dispute, but have been unable to reach an agreement on issues such as guaranteed weeks of work, sick day pay and a salary increase.

The union represents about 300 drivers, monitors and mechanics.

A federal mediation session is set for November 6 p.m. Tuesday, with others to follow.

To our Union Employees, School Districts, and the Public;

As everyone is aware, Transportation Workers Union Local 252 began its strike against the Company today. It is disappointing on many levels, not the least of which is that the parties are scheduled for Federal Mediation on November 7, November 10, and November 28.

We again, however, would like to provide you with facts. Union President Debra Hagan informed the press that "We have tried to come to terms. The company's answer is it's their way, and that's it." Nothing could be further from the truth. The Company has made many concessions throughout the negotiations and thought the parties had made great progress the evening of November 1, 2017 before the Union stated it was reverting to its proposal from earlier that morning. The Union also stated that there was no deal unless the Union's proposal of employees being paid for all days off on the school calendar and paid more if the Company needed employees to work on those days. Please keep in mind that these are not holidays that are in question but days such as teacher conference days. These are days that employees previously never received pay for unless they worked the day. The Union is insisting that employees be paid almost double when they work on these days and states it will refuse any proposal from the Company that does not include this provision.

It is unfortunate that the Union is unable to tell the truth about what is occurring at bargaining. The Company plans to bargain in good faith at the Federal Mediation on November 7, 2017.