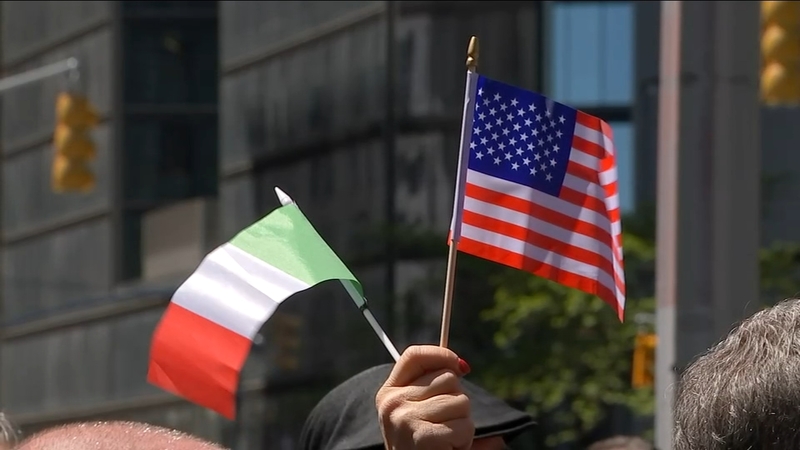 "Christopher Columbus is here, he's here to stay," attorney Arthur Idola said. "And on behalf of the lawyers, we are going to do everything that the legal system has to offer to make sure Columbus is not forgotten."

Last week, the Department of Education removed the explorer from the official holiday in his name, initially saying schools would only celebrate Indigenous Peoples' Day on October 11 but later amending it to also include Italian Heritage Day.

"Italian Heritage Day/Indigenous People's Day will celebrate the contributions and legacies of Italian Americans and recognize that Native people are the first inhabitants of the land that became our country," the DOE said in a statement. "By including these holidays on our calendar we are honoring the past, present, and future contributions of Indigenous communities and Italian Americans."

But for those who attended the protest, that simply won't do.

"At this time when we strive for unity and respect for the civil rights of all, Mayor de Blasio and his education department violated the civil rights of tens of thousands of Italian American students in New York City," said Angelo Vivolo, with the Columbus Citizens Foundation.

Mayor Bill de Blasio said the change onto the New York City Schools 2021-2022 calendar was made without Chancellor Meisha Ross Porter's or his own input.

Republican lawmakers were quick to jump on the issue, with City Council members Joe Borelli and Steve Matteo and Congresswoman Nicole Malliotakis issuing a joint statement demanding the Department of Education restore the name "Columbus Day" to the holiday.

"Columbus Day has been celebrated in the United States since 1972 (sic), marking the 300th anniversary of Columbus' sailing," they wrote. "The holiday, which venerates celebrated Genovese explorer Christopher Columbus, has been observed by Italian-Americans since 1892 when President Benjamin Harrison declared the day a holiday following the lynching of 11 Italian immigrants in the City of New Orleans. Nearly 1 million Italian Americans reside in New York City and 5th Avenue is home to the largest Columbus Day parade in the country. Borelli, Malliotakis and Matteo believe Indigenous Peoples' Day can be celebrated without a change to Columbus Day."

De Blasio previously said the day should not have been "arbitrarily" changed.

"I'm an Italian American, I could not be more proud," de Blasio said. "I focus on my heritage all the time. I honor my grandparents who came here from Southern Italy. I've been to their hometowns. I could not feel my heritage more strongly. We have to honor that day as a day to recognize the contributions of all Italian Americans. Of course, the day should not have been changed arbitrarily. I think saying it's a day to celebrate Italian American heritage is absolutely right and appropriate, and that's the way to talk about it."

Another big change, Election Day will be a remote learning day for students as well.

Governor Andrew Cuomo also weighed in, saying Columbus Day will remain on the state calendar, and "that applies to every city," including New York City.

Cuomo also said he disagrees with the city's creation of a combination holiday.

"Why do you feel the need to diminish the Italian American contribution to recognize the indigenous peoples' contribution?" Cuomo said.