7 On Your Side Investigates: Broken scanners, long lines on Election Day 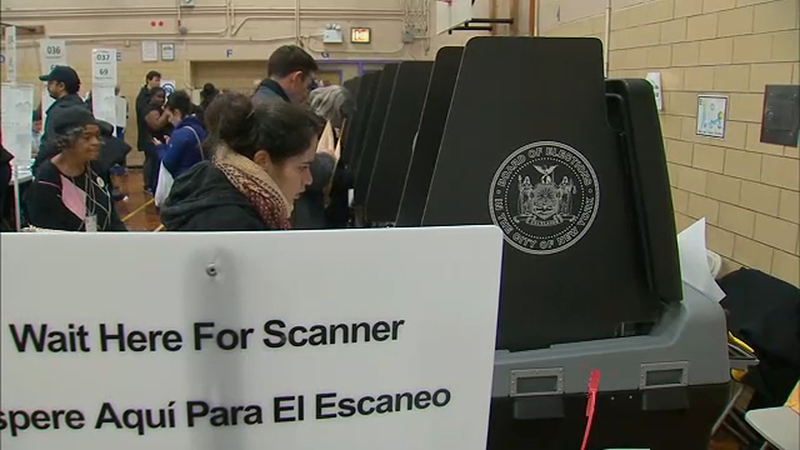 NEW YORK (WABC) -- New York City Mayor Bill de Blasio called for major reforms at the New York City Board of Elections one day after hundreds to thousands of voters experienced frustration and trouble voting during the Midterm Elections due to long lines often caused by broken ballot scanning devices.

The broken machines in many ways represented a breaking point in tensions between city officials and the Board of Elections, whose operations are governed by state and federal laws.

In 2016 and 2017, a city audit demanded improvements from BOE following concerns about the agency's handling of equipment and the purging of more than 100,000 voter registrations by the agency.

"The really bad news is the BOE can't function. It can't do its job," de Blasio said and called on BOE Executive Director Michael Ryan to do better. "He has to be ready to take on a role that is more professional... If he has any hesitation, he should leave."

Ryan declined to comment on demands that he resign. He also said BOE didn't yet know exactly how many scanners broke down or exactly how widespread the problem was.

"I don't like to grade until I have a final analysis done," Ryan said. "I'm like the head coach on a football team. You know some things went wrong but until you get back and analyze the game film, it's hard to pinpoint exactly what went wrong."

On Tuesday, the Board of Elections fielded dozens of complaints on social media about broken scanners in Manhattan, Queens, the Bronx and Brooklyn and while BOE couldn't assess how widespread the problems were, '7 On Your Side Investigates' crunched 311 call data from election day.

The analysis revealed the city hotline received more than 6,000 voting-related calls and more than one in ten of them were regarding complaints about poll sites or workers. The majority of calls were related to questions about where to vote and voter registration.

'7 On Your Side Investigates' also independently tracked complaints about broken scanners at around 3 dozen schools and community centers being used as voting locations.

The problematic sites tracked by Eyewitness News indicated the city saw problems at about 3% of its polling sites and possibly more, translating into delays for hundreds to thousands of voters.

Some complained to Eyewitness News they left polling sites experiencing a total breakdown in equipment, unable to wait and unable to vote.

"A lot of this stuff is beyond our control," Ryan said, blaming the breakdown on aging equipment, high voter turnout and the first year with a two-page ballot.

"We really have to start thinking about modernizing the voting process in New York City," Ryan said.

Mayor de Blasio complained the city offered BOE $20 million in 2016 to help with upgrades but said BOE declined the money because it came with demands for reforms.

"I have never encountered an organization that said, 'No,' to $20 million because it required some improvement in its operations," de Blasio said.

Ryan said there was a much more complicated reason why BOE didn't take the money and declined to provide an explanation.

Mayor de Blasio did agree with Ryan that the state needs to pass new laws to modernize how elections are carried out in New York.

"This is an arcane institution," de Blasio said. "It must be changed once and for all."