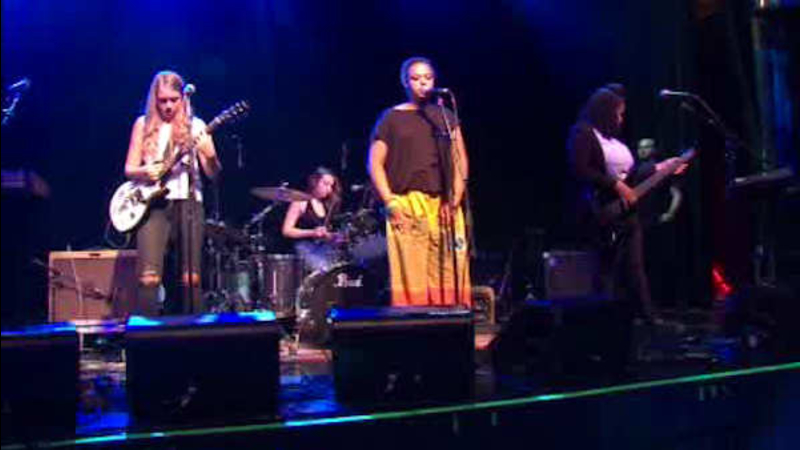 NEW YORK (WABC) -- When you think of rock bands, a group of teenage girls may not be the first thing that pops into your head. But a new group of musicians in our area is challenging stereotypes about gender and age.

The band may be called Harsh Crowd, but the fans at Irving Place were more cool than cruel. It wouldn't have been unusual except for the fact the musicians are are just 14 years old and have been playing together since the age of 11.

"A lot of times, people pigeonhole us into, like, a kid band," Faske said.

"They'll look at us, like who are those kids? Why are they here? Like, this is the bar," Abdulrashid Davis said. "Like, where are their parents?'"

But they're right there, because their parents are their roadies.

"They bring us everywhere we need to be," Brogaard-Thompson said. "And they supply us with all the things we need."

And there isn't a stage mother among them.

"I love the fact that none of the parents are sort of pushing the kids to do something they don't want
to do," mom Rikke Brogaard said. "I think we're all on the same page about wanting them to be good students."

Backstage, they do seem like students hanging in the halls at school. But setting up for the show, they are all business.

"All of these girls are my closest friends," Bennison said. "And we've spent so much time together that it is really natural to be on stage together."

"And seeing people listen to it, it's just very rewarding," Faske said. "And it's like the gift after all that hard work."

The rockers of Harsh Crowd say their music is a combination of many genres, "anything and everything," according to Brogaard-Thompson. They don't label their music, though, because they worry it would close them off from trying new things.
Related topics:
arts & entertainmententertainmentmusicsandy kenyon
Copyright © 2022 WABC-TV. All Rights Reserved.
TOP STORIES
Travel Advisory issued in NYC for Monday due to severe storms
Alleged gunman in Buffalo shooting asked to leave store day before
Buffalo suspect had plans to continue killing, commissioner says
What is white replacement theory? Belief fueling racist attacks
Hero security guard, shoppers among Buffalo shooting victims
Livestream of Buffalo mass shooting removed in under 2 minutes: Twitch
Alleged Buffalo shooter's prior threat, hospital stay face scrutiny
Show More
NYPD steps up patrols, Adams to speak at vigil in wake of massacre
AccuWeather Alert: Gusty storms
2 killed in fiery crash in the Bronx
Shelton teen fatally stabbed, 3 others injured outside home
McDonald's leaving Russia altogether amid Russia-Ukraine war
More TOP STORIES News