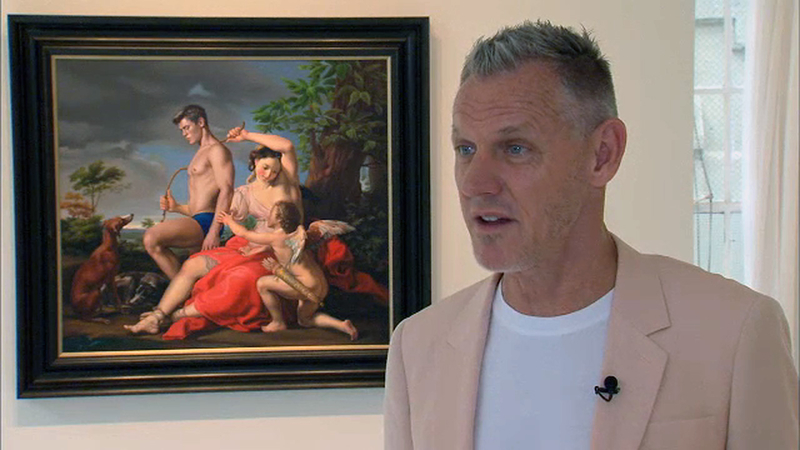 CHELSEA, Manhattan (WABC) -- An artist from Australia who paints ultra-realistic images that look like photographs and has a growing list of celebrity buyers is marking Pride Month with his first solo exhibition in New York City.

Ross Watson's "Homines Uniformis" is on display at Rogue Space in Chelsea for WorldPrideNYC through the end of the month.

"Through my career, I've been drawn to depicting opposites," he said.

And one incredibly realistic oil painting shows just that -- a buttoned up uniformed guard posing with a much less buttoned up Australian surfer.

"Who is very happy with nothing but his surfboard," he said. "Completely naked. That's right."

The striking showcase of the male form gained the openly gay artist the attention of celebrities like Sir Ian McClellan and Elton John, who sometimes spend tens of thousands of dollars on a single work.

"Nudity and sexuality, it should be celebrated and explored in art, but it rarely is," Watson said.

The exhibition is free at the venue on West 26th Street, where you'll also find him signing his new book.

"He is gazing toward the construction worker, who is either taking his shorts off or putting them on," Watson said of one piece. "We don't know."

Some works are less scandalous, leaving the interpration up to the viewer.

But all of it has one goal in mind.

"We still, unfortunately, have young men and women who are challenged by shame that they feel," Watson said.

It is building pride by celebrating the male form, on display through June 30.