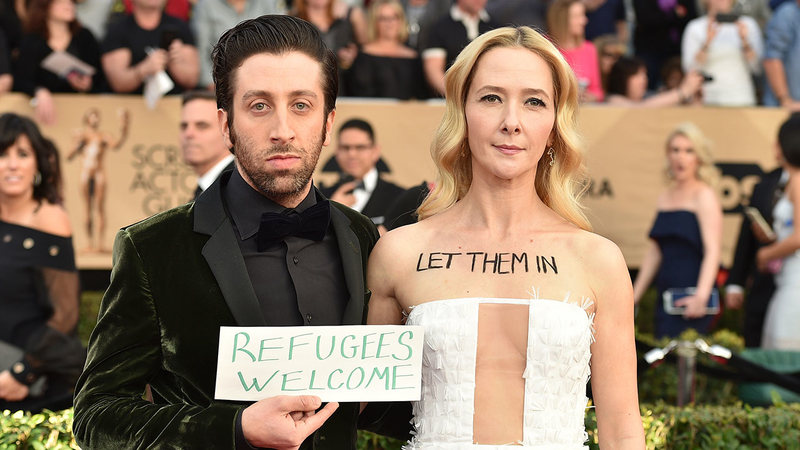 As stars took to the red carpet at the Screen Actors Guild Awards in Los Angeles on Sunday, protestors around the country took to the streets. The protestors were reacting to President Donald Trump's executive order restricting the entry into the U.S. of people from seven Muslim-dominated countries.

From the red carpet to acceptance speeches, celebrities made their opinions heard about the immigration order at the award show.

Simon Helberg of The Big Bang Theory and Florence Foster Jenkins held a sign that said "refugees welcome," while his wife, Jocelyn Towne, had "Let them in" written across her chest.

Kerry Washington, who was nominated for Confirmation, wore a safety pin on her arm.

Earlier in the day she wrote on Instagram that the safety pin was because of the immigration order: "I'll be wearing one of these tonight. On my arm. To show solidarity. We will not stop fighting for our safety & the safety of our fellow citizens and human beings. #NoBanNoWall #safetypin"

Washington reflected on her vocal stance at the top of the show, saying,

"A lot of people are saying right now that actors shouldn't express their opinions when it comes to politics, but the truth is, actors are activists no matter what, because we embody the worth and humanity of all people."

During his opening monologue, Ashton Kutcher directly addressed people waiting in airports as they try to enter the country.

After Julia Louis-Dreyfus won Outstanding Performance by a Female Actor in a Comedy Series for her role on Veep, spoke about her immigrant father.

"My father fled religious persecution in Nazi-occupied France," she said. "Because I love country, I am horrified by its blemishes. and this immigrant ban is a blemish, and it is un-American."

The cast of Orange is the New Black won Outstanding Performance by an Ensemble in a Comedy Series spoke about its own diversity stemming from families of immigrants.

"We stand up here representing a diverse group of people, representing generations of families who have sought a better life here," the show's star, Taylor Schilling, said. She encouraged the audience "to keep telling stories that show what unites us is stronger than the forces that seek to divide us."

"My mother is an ordained minister. I'm a muslim. She didn't do backflips when I called her to tell her I converted 17 years ago, but I tell you now, you put things to the side, and I'm able to see her. She's able to see me. We love each other."

The cast of Stranger Things won Outstanding Performance by an Ensemble in a Drama Series, and David Harbour's speech on behalf of the cast drew a large applause from the audience.

What a passionate speech by @DavidKHarbour on behalf of the @Stranger_Things ensemble! #StrangerThings #sagawards pic.twitter.com/EhTMXNsOTx