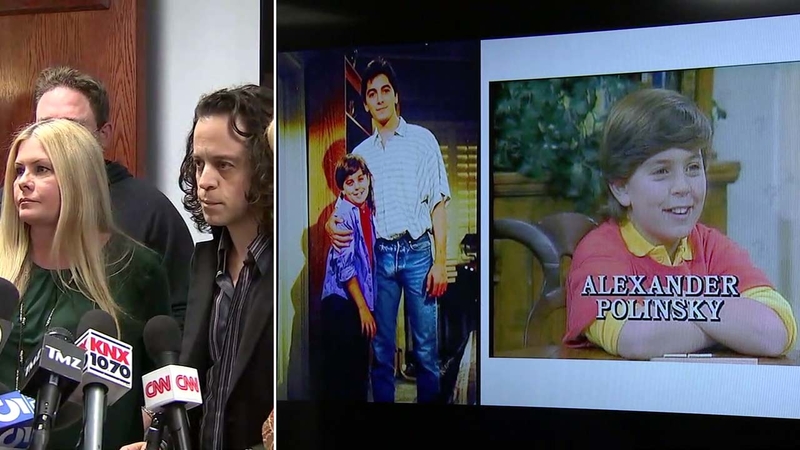 "I was sexually harassed by Scott Baio and ultimately assaulted by him between the ages of 12 and 15 years old," Polinsky said at a news conference alongside fellow co-star Nicole Eggert and their attorney, Lisa Bloom.

Polinsky was a child actor on the 1980s sitcom. He described an incident during the first year of the show - when he was 11 or 12 years old - in which he witnessed Eggert on Baio's lap backstage.

"I was so naive, I innocently hopped on his lap, expecting to hear a story about Fonzie and 'Happy Days,' something awesome," Polinsky said. "Scott Baio was a hero to me."

Instead, Polinsky said Baio threw him off his lap and began calling him "f****t" while Eggert laughed.

"I felt confusion, shame and then fear when I realized that I had judged the situation wrong," Polinsky said. "It was not innocent. It was sexual in nature."

Polinsky said he witnessed Baio and Eggert's relationship develop on the set, and it "was very distressing to me to see a man I looked up to behaving in this way with someone who is very close to my age."

Polinsky said this event triggered an "unrelenting" pattern of abuse.

"Mr. Baio repeatedly told me about gay sex acts that he told me I would grow up to perform," he said. "I would protest and asked him to stop saying these things, but he said it was for my own good."

Polinsky recalled another instance in which he faked throwing a basketball to Baio.

"He got startled, and in anger, he assaulted me by throwing a burning hot cup of tea in my face," Polinsky said. "I ran from the set crying. Scott later apologized, but the abuse continued."

He said Baio continued to call him slurs on set, and that adults on set were aware of what was going on but "were too scared of losing a job on a hit show to act."

Polinsky said children in the entertainment industry need to be protected and that he wants healing for himself and Eggert, as well as Baio.

"I'm praying for him in all of this," he said. "I still have hope he can realize his wrong doings, apologize publicly, and we can all have some healing. In truth, that is all I am looking for - not fame, not money, not revenge - healing."

After Polinsky spoke, Eggert took to the podium. The actress has accused Baio of sexual abuse, while Baio has said her claims are not true. Eggert on Wednesday mainly spoke about the abuse she said she witnessed from Baio to Polinsky on set. She echoed Polinsky's belief that the abuse on Polinsky began when he walked in on her and Baio being intimate.

"As an adult, I carry huge guilt that I was part of this in any way," she said. "I feel horrible and guilty that I didn't stand up for him at the time, but I myself was a child. We were children. And I was also enduring my own abuse from Scott Baio, so it was hard for me to stand up for anybody else when I was trying to find my own truth."

Eggert said Polinsky was consistently picked on, tripped, pushed around and "berated with horrendous homosexual slurs all because he was at the wrong place at the wrong time and witnessed something he was not supposed to see."

"It is never too late to start your healing process and take care of yourself," she said.

Bloom said both Eggert and Polinsky have spoken to the police and said there is a possibility of criminal action.

"There is a longer statute of limitations in California for acts of child sexual abuse against a minor under the age of 18, which both of them were at the time," Bloom said.

Bloom explained that there are two different laws - one which allows prosecutors to bring charges within one year of the first police report. She said Eggert's first police report was just last week. Bloom said there is also an older law that would state that the time limit has expired.

"I'm going to leave that for the prosecutors to decide, but I'm very proud that Nicole and Alex did their part by coming forward and speaking to the police," Bloom said.