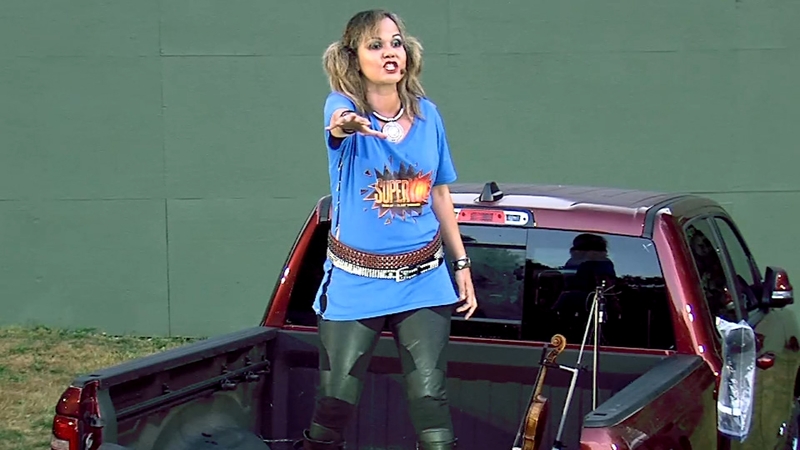 AMENIA, New York (WABC) -- When Manhattan theaters went dark four months ago, so many dreams were shattered. The shutdown of Broadway and Off-Broadway has been extended into next year, and some shows will never re-open.

All of which makes the story of one troupe all the more extraordinary.

Lourds Lane and her fellow performers are giving new meaning to the old saying that "the show must go on" by singing from the back of pick-up trucks at a Dutchess County drive-in movie theater.

"It's about knowing that you are powerful and your voice matters," she said. "That's what 'SuperYou' is about."

The show was finally headed to the Darryl Roth Theater Off-Broadway and set to open May 27, but that was before the pandemic hit.

"It was heartbreaking for us because we were all set to open," said Lane, who also wrote the book, music, and lyrics for her musical.

She would not be deterred, though, coming up with an alternate plan to relocate her volunteer cast and crew to Amenia, New York. But her challenges didn't end there.

"Yes, it is raining," said Lane, who is shown in a promotional video onsite with a mask under an umbrella.

It's been said that where there's a will, there's a way, and it helped that Mother Nature decided to cooperate.

"In a way, the more obstacles there were, the more exciting it was," she said. "Because it gave us all a chance to use our creative minds again."

I find it so fitting and appropriate that a show celebrating the power inside all of us be the one to demonstrate the resilience of live theater and show us what's possible now.

"Through trying times, through uncertainty, real union and innovation and heartfelt magic can happen if you believe," Lane said.