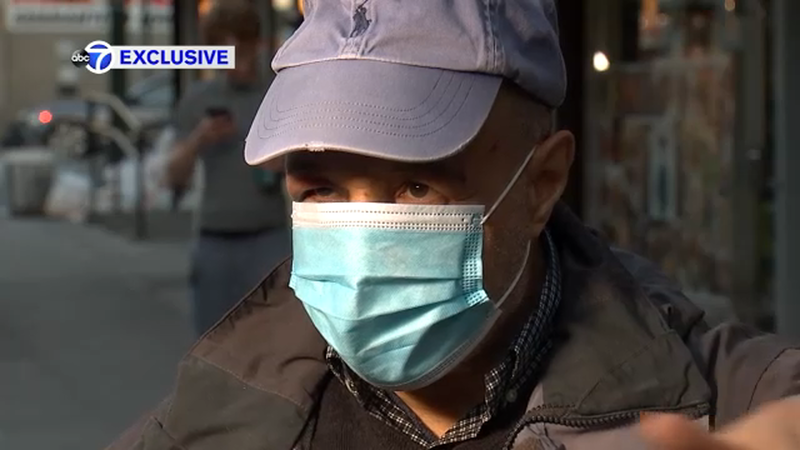 UPPER EAST SIDE, Manhattan (WABC) -- A man who was attacked, beaten and robbed in a subway station is speaking out about the vicious encounter.

The men followed him to the turnstile where they demanded money. One of the suspects slashed the victim's forehead with a razor before they ran off.

Now the victim has 12 stitches in his forehead, one eye swollen shut and the other has two more stitches.

He also wore a giant COVID mask blocking what's left of his face as he spoke to Eyewitness News, out of fear his attackers may come after him again.

"I feel angry and upset and sad," the victim, who asked to be identified only as H.M., said.

As if going through it the first time wasn't bad enough, video released by the NYPD shows the brutal attack.

He was punched until he fell into the turnstile as he hung on for dear life.

Then one of the men slashed him in the forehead before they stole his cellphone and about $150 in cash -- leaving him gushing blood alone in the station.

"Hit me two times here, in this eye and this eye, and the other guy, he brought a razor," the victim said. "And the blood start coming and took the money from me and disappeared."

The victim has just finished praying at a Midtown mosque and was heading home to Brooklyn.

Police released the video, along with still images, showing the suspects' distinctive limited-edition footwear -- one wore NBA Timberlands and the other wore a rare Nike model.

As for the victim, he's lived in the city for 30 years and commutes to Manhattan only to pray. But not anymore -- he no longer feels safe.

"You have to take care about this issue, or it will be long while, you can't control it," he said. "And in this case what are the police for?"

This all comes amid a war of words between the mayor and the MTA, which has charged the police are not visible enough across the system. The city recently pledged 250 additional cops, but it clearly did not help preventing this crime.