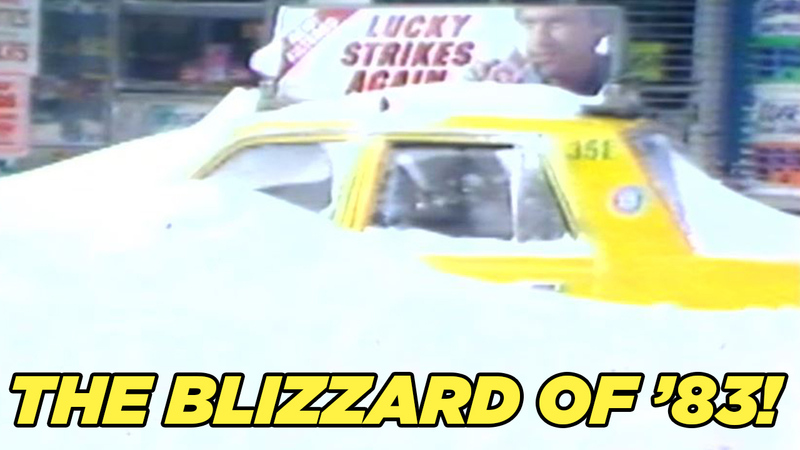 New York (WABC) -- It's gone on to be called the "Megalopolitan Blizzard."

From Feb. 10 to 12, 1983, a snowstorm socked the East Coast, burying cities from the mid-Atlantic to the Northeast.

The New York area was all but shut down, with Central Park covered in 17.6 inches, making it the 13th largest snowstorm on record in the city.

But that's only part of the story -- other portions of the Eyewitness News viewing area received over two feet of snow.

This video was compiled from original coverage found in the Eyewitness News Vault that aired from Feb. 11-13, 1983.

You'll see the chaos on the roads (and our news crew rescuing trapped drivers) as well as the trouble at the airports and the subways, and the inevitable raid of supermarkets for bread and milk.

And you'll see how residents of Brooklyn and Queens coped with so much snow that the plows themselves needed to be dug out.

You'll also see the bright side -- the rare snow day that New York City school kids were able to enjoy, with the requiste sledding in the parks.

Visit us on social media to share your memories of this blizzard.
Report a correction or typo
Related topics:
new york citynew jerseysnow stormvaulthistorysnowsubwayblizzardjfk international airportthis day in history
Copyright © 2021 WABC-TV. All Rights Reserved.
TOP STORIES
How NYC and the Tri-State are celebrating Juneteenth
George Floyd statue unveiled in Brooklyn
AccuWeather: Humid with PM storm, air quality alert issued for Long Island
Will NYC, Tri-State area be impacted by Tropical Storm Claudette?
Wife of man killed by Honolulu police: 'If it was me, I'd still be alive'
Biden family dog Champ dies
Candidates make final pushes ahead of NYC mayoral primary
Show More
What to know about voting in NYC's mayoral primary
NYC elections: What is ranked choice voting?
CT aquarium to auction off chance to name 3 beluga whales
Kids dive for cover as gunman opens fire on NYC sidewalk
Shooting spree suspect thought people were after him for prior shooting: Police
More TOP STORIES News