FDNY: Fire that destroyed 15 businesses in Queens sparked by cooking on stove 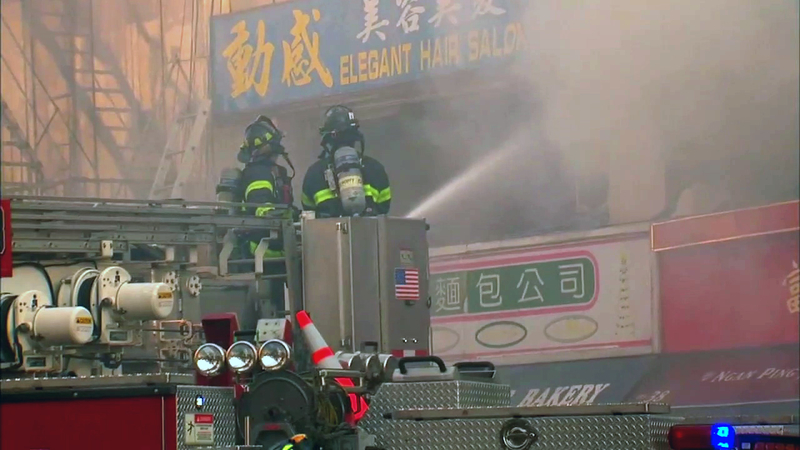 FLUSHING, Queens (WABC) -- The fire that ripped through a row of businesses in Queens Wednesday was accidental, FDNY fire marshals said Thursday.

Investigators say it was sparked by a stove fire, caused by cooking.

Firefighters battled the large fire Wednesday afternoon and into the night in a shopping district that spread to at least 15 stores.

The fire broke out at about 2 p.m. on Roosevelt Avenue near the intersection of Main Street in Flushing. It took until after 8 p.m. for the fire to be extinguished.

The fire generated a four-alarm response.

Fire officials said there was a partial collapse of the rear roof.

"This is a difficult fire, a lot of smoke. Pockets of fire travel to different occupancies," said Chief Joseph Pfeifer, FDNY.

Here's a look at photos showing flames shooting from the roof:

Fire officials said the fire was in the duct work of the building, and that's how they believe it spread to the second building and beyond.

Witnesses described a genuine fear for firefighters safety. It took more than 175 of them to get the blaze under control. A store sign collapsed just moments after they entered the building.

"Just shock. They're inside and the fire is just getting bigger. So I was afraid for them," said Chris Urban, a witness. "And then they were getting the saw and cutting the sign as fast as possible."

Three firefighters are being evaluated at the hospital for minor injuries.

"These are local mom and pop stores, it's absolutely heartbreaking. It's not just the owners. There are dozens if not hundreds of workers at these 15 stores. These are working families, everyday people that rely on those jobs to put food on the table. So they're nervous, they're scared," State Assemblyman Ron Kim said.

The fire disrupted service on the 7 train line for hours, but it resumed service with delays just before 11:30 p.m. Several buses remain detoured, including Q48, Q12 and Q15.

Here's video from the Eyewitness News reporter CeFaan Kim at the scene:

FDNY says spread to 15 stores. 175 firefighters on scene. Will take few more hours to get under control. Cause being investigated. pic.twitter.com/al0tZinUJQ

Officials say the timing of the fire was especially bad, coming less than two weeks before the community celebrates the Lunar New Year.