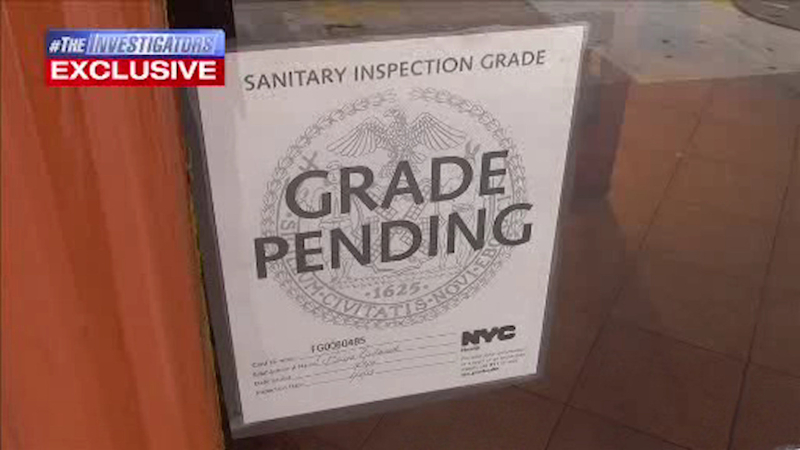 NEW YORK (WABC) -- Some restaurants in New York City have a dirty little secret; they are trying to hide their less than passing Heath Department grade.

If you're one of those people who looks for that A-grade in the restaurant window, this story is for you.

"I think it's an A," said James McDuffee, a restaurant chef.

You would think with an A grade, the chef at this popular West Village restaurant would have that A posted in the window.

"I noticed no grade?" Hoffer said.

"Probably means someone stole it, not aware of it. I'll make sure it's put up," McDuffee said.

It's more likely there's no grade posted because "Joseph Leonard" actually got a C in its last graded inspection.

The well-known restaurant had five health violations including food kept at unsafe temperatures and flies.

Hoffer: This says you have a C not an A?
Chef McDuffee: I don't have the information in front of me.
Hoffer: Is that why it's not posted?

Eyewitness News found other restaurants not posting their grade.

Manager: An A.
Hoffer: You got an A?
Manager: Yeah!

"Kori Tribeca" actually got a C in their latest grade inspection.

The Health Department inspector slapped them with the lowest grade after finding nine sanitary violations including "presence of live roaches, flies and food not protected against possible contamination."

That C, which by law should be posted in the restaurant's window, is nowhere to be found.

"That's illegal. You are supposed to post the grade in the restaurant," Hoffer said.

Other restaurants hid their grades. "Joe's Coffee" in Chelsea had their C hidden behind a bench, and around Wall Street at "Benton Cafe", it was like a scavenger hunt to find their grade.

"That's it...C grade, but here now it was up against the wall you couldn't see it," Hoffer said.

In many cases, the bad grade is masked by a "GRADE PENDING" which restaurants can use to appeal a C grade.

But often even when they lose the appeal, they keep the "GRADE PENDING" sign in the window.

"What was your last grade?" Hoffer said.

"I believe it was an A," said Tony Osorio, "Galli" manager.

Untrue, as "Galli" Italian restaurant in SoHo lost an appeal of their C grade meaning they should have taken down the "GRADE PENDING" and posted the C.

They've already been fined twice for not posting their C.

"It negatively impacts your business if you don't have an A," Osorio said.

"Clearly based on your investigation they are not complying with the law. They are not taking it very seriously and they are undermining it and putting consumers at risk," said Letitia James, NYC Public Advocate.