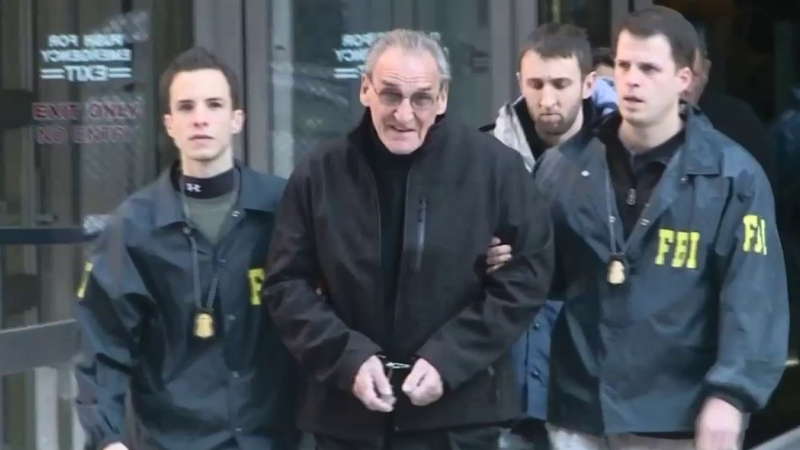 NEW YORK -- An aging mobster threw his hands into the air and shouted "Free," grinning as he walked out of a courthouse following his surprising acquittal on charges he helped plan the legendary 1978 Lufthansa heist retold in the hit Mafia film "Goodfellas."

A federal jury reached the verdict Thursday at a Brooklyn racketeering trial where it heard testimony that portrayed 80-year-old Vincent Asaro as a throwback to an era when New York's five organized crime families comprised a secret society that committed brazen crimes and settled scores with bloodshed.

It was a stunning defeat for the federal government in a courthouse where prosecutors over the years have won convictions of major mob figures like Gambino family head John Gotti and Genovese crime boss Vincent "Chin" Gigante. The U.S. attorney's office declined to comment after the verdict. The jurors, granted anonymity by the judge, did not appear to depart through any public exits.

"I was shocked, I was really shocked," Asaro said outside. "I've got two years in, and I'm dying to get home."
As he hopped into a waiting car, Asaro quipped to one of his lawyers: "Sam, don't let them see the body in the trunk."

Asaro managed to stay in the shadows for decades by adhering to the Mafia's strict code of silence. His father and grandfather were members of the secretive Bonanno crime family, and he "was born into that life and he fully embraced it," Assistant U.S. Attorney Alicyn Cooley said in closing arguments. His devotion to the Bonannos "was as permanent as the 'death before dishonor' tattoo on his arm," she added.

At trial, prosecutors described how Asaro rose through the ranks and developed an "unbreakable bond" with the more notorious James "Jimmy the Gent" Burke, the late Lucchese crime family associate who orchestrated the holdup at the Lufthansa cargo terminal at Kennedy Airport. Taking the witness stand last month, Asaro's own cousin Gaspare Valenti testified that Asaro and Burke killed a suspected informant with a dog chain in 1969 before ordering Valenti to help bury the body.

Valenti also testified that Asaro drafted him for the Lufthansa heist, telling him, "Jimmy Burke has a big score at the airport coming up, and you're invited to go."

When he learned about the mountain of $100 bills and jewels taken from a Lufthansa vault, Asaro was "very happy, really euphoric," Valenti testified. "We thought there was going to be $2 million in cash and there was $6 million."

But jurors apparently didn't buy it. Asked what he thought of Valenti, Asaro said: "You don't even want to know."

Asaro said he believed jurors found him not guilty because the prosecution's case was "overkill."