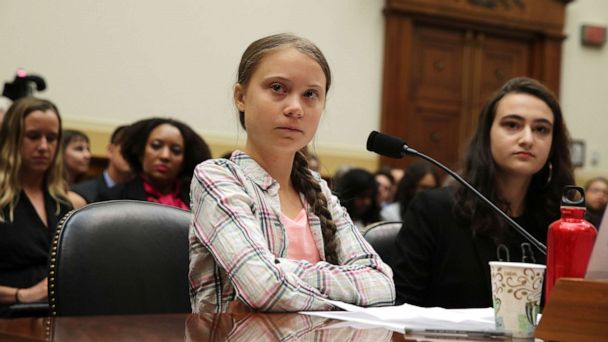 "I don't see a reason to not listen to the science," Thunberg told the House Foreign Affairs Committee. "It's not just a thing we should be taking for granted. We listen to the current best-available, united science. It's just something we should do. This is not political opinion or views, this is science."

Thunberg, who has been nominated for a Nobel Peace Prize, has attracted world-wide attention for encouraging global student-led strikes, known as "Fridays for the Future." She's earned a celebrity reputation in the U.S. among young people, appearing on Comedy Central's "The Daily Show" and sharing a fist bump with former President Barack Obama during a visit on Tuesday.

When asked by lawmakers on Capitol Hill how to get young people involved, she said adults should "tell them the truth."

"Tell them how it is," she said. "Because when I found out I was furious. I wanted to do something about it."

Rep. Garret Graves, R-La., said the U.S. has made strides in limiting climate emissions and that China was taking the lead in releasing carbon emissions known to contribute to climate change.

Thunberg responded that China's emissions levels shouldn't be an excuse for the U.S. to back off its own efforts to limit greenhouse gases.

"I am from Sweden, a small country. And there, it is the same argument. 'Why should we do anything, just look at the U.S.,' they say. So, just so you know, that is being used against you as well."