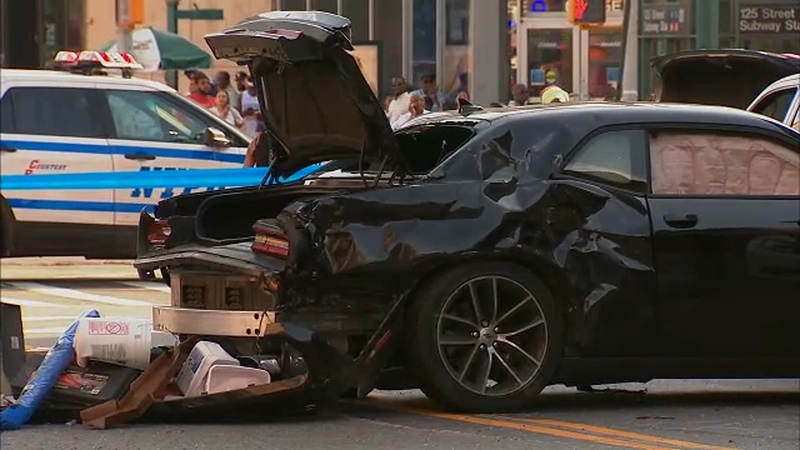 HARLEM, Manhattan (WABC) -- Detectives with the NYPD spent Friday night looking for the driver of a stolen black Dodge Challenger that slammed into at least eight cars in Harlem before coming to a stop after hitting three cars at W 125th Street and St. Nicholas Avenue Friday around 5 p.m.

Witnesses said the driver, described by some as shirtless and packing a gun, hopped out of the Challenger and ran into the subway evading police, who pulled up on the wreck shortly after the chaos unfolded.

Roughly four hours after a rampage by a stolen vehicle in Harlem, tow trucks are carrying away the cars damaged in the wreck. At least 8 cars hit. Up to 7 people injured. 2 hospitalized. @ABC7NY pic.twitter.com/4OqLxQQH9d

"Bam, bam bam, it was crazy," said Michael Flowers, who witnessed some of the wild ride.

"It was a lot of screeching and many cars banging," said Kim Davis, who ran out of her apartment building after hearing the commotion.

"It was so quick, I can't even explain it to you," said Kevin DeShields, who witnessed the wreck at W. 125th Street.

Just before hitting a Mazda, a Nissan and Toyota at W. 125th Street the Challenger had slammed into a Fiat one block north.

Police indicated the driver had also hit at least four other cars while driving through Harlem.

Police shut down the subway entrance to the A,C,B,D lines that the driver used to get away and shut down one block of St. Nicholas between W. 125th and W. 126th while they gathered evidence.

About four hours after the wreck, tow trucks came to remove the damaged vehicles from the road, and roughly half an hour later, officers reopened the street to traffic.

At least seven people were hurt, according to police.

Two of the injured were taken to nearby hospitals, but officers said neither of them suffered severe injuries.

Witnesses said they were shocked no one that was severely injured or worse, killed.