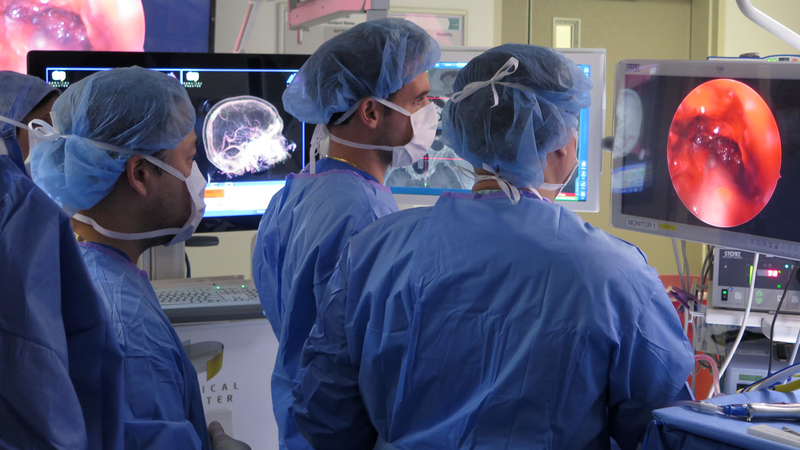 ELMHURST, Queens (WABC) -- A talented teenager from Queens has big ambitions of becoming a professional opera singer, but a scary diagnosis almost shuttered his plans.

"I looked forward and I started seeing two windows, so I had double vision," Abella said.

He went to the doctor to see what was happening, and tests revealed that there was a tumor -- a little larger than a golf ball -- at the base of his skull. It was compressing his spinal cord.

Doctors at Mount Sinai Beth Israel said the tumor is called Clival Chordomo, and could cause major neurological deficiencies.

Skull base surgion Dr. Del Signore said it's extremely rare to see this type of tumor in someone Ghalahad's age -- it normally affects patients who are between 20 and 40 years old. It odds are one in a million patients getting this type of tumor -- and about 300 cases are diagnosed each year.

For Ghalahad, they decided to use a high-tech way to remove it.

"In that location we found that it was most amenable to a trans-nasal approach," Dr. Del Signore said.

That meant accessing the tumor through the nose, a much less invasive procedure than through the brain.

"I said do whatever you can, as long as Ghalahad will be safe," said Maria Heidarpoor, Ghalahad's mother.

Dr. Del Signore and neurosurgeon Dr. Costas Hadjipanayis used a technique called "surgical theater," a virtual reality tool that gives them 3D images of the skull and brain, as well as the ability to plan out how to navigate through the nasal cavity to the tumor.

The tumor tested benign, but Ghalahad was still nervous.

"The first thing I asked the doctor was 'will the surgery affect my voice, because that is like something super important to me,'" Ghalahad said.

After the surgery, he was out of the hospital in just two days and is recovering.