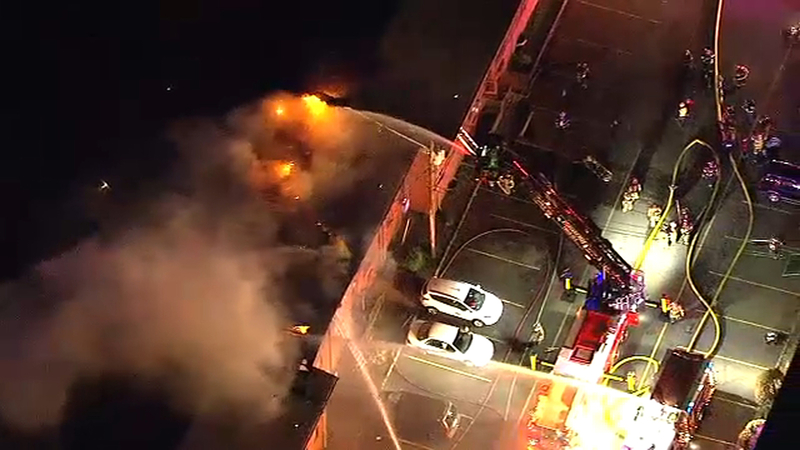 HIGHLAND PARK, New Jersey (WABC) -- A fast-moving fire tore through an apartment complex in New Jersey on Christmas Eve, forcing 18 families out of their homes.

The fire broke out at about 5:30 p.m. at the Cedar Lane apartments in Highland Park.

The roof collapsed on several of the apartments as the fire spread in the two-story complex. Smoke could be seen for miles away.

Firefighters attempted to keep the flames from spreading to other buildings.

They worked to protect people's homes but the fire proved impossible to contain.

"They all came fast just in that moment in time, it doesn't seem fast enough," said Madhu Banerjee, who watched the blaze consume everything she had. "2018 was a pretty bad year, and I was looking forward to getting over it. And just when you think it can't get any worse, it can."

It was just getting dark when someone smelled smoke and called 911. The first firefighters arrived two minutes later, but it was already too late.

"The fire had a long head start," Highland Park Assistant Fire Chief Tony Szemereta said. "I mean, usually we can get it when it's contained in an apartment, but it had already gotten out of the apartment through the roof in the attic."

Neighbors say the person who lives there, who wasn't home at the time, is notorious for hoarding belongings, a condition that created what firefighters call a Collyer Mansion. With so much on fire, it created dangerous obstacles to finding the source of the flames.

And in this case, it meant dozens of others had to suffer. Their landlord put them up for the night, but after that, they're on their own.

"I feel bad for the people that lost everything," Szemerata said. "It's going to be hard to pick up from that."

Four apartments were completely destroyed and more than a dozen others were heavily damaged. But thankfully, there were no injuries.

"I'm eager to go back and see what can be salvaged, but I feel bad," Banerjee said. "I think everything is gone. It's not a good feeling."

Hours after the flames were knocked down, firefighters were still putting water on the building.